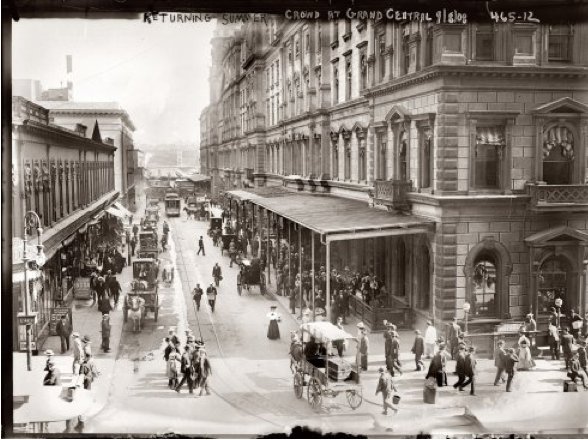 Below is my initial proposal and following that is my thought process following class on Wednesday Oct. 5:

The Heart of New York City

Located at 87 East 42nd Street, Grand Central Station has grown to become known as the heart of New York City’s transportation since it opened at 12:01 am on Sunday, February 2, 1913. On a regular day seven-hundred and fifty thousand people pass through Grand Central Station while over 1 million people pass through on the holidays. An average of 7 500 people an hour pass the corner of 42nd street and Vanderbuilt Avenue and 21.6 million out-of-town tourists visit each year. Grand Central is now served by Metro-North commuter trains, 31 commuter and 15 city bus routes, 7 subway lines, buses to and from New York’s three major airports and finally serves two million taxi’s per year (Demographics).

Being that this terminal cites the most traffic of any other transportation hub in New York city I would like to map the historical transformation of commuter traffic through the Grand Central Terminal and see how this historic building managed to become home to 5 major forms of transportation for New York Commuters. Each day New Yorkers walk, train, bus, subway or taxi to, from or by Grand Central to get to their resepctive destinations. Many people rely on this station to take them to their homes in Manhattan, Queens, The Bronx, Harlem, Brooklyn, Connecticut, New Jersey, Long Island and so on. The history behind building such a massive transportation system is important to understand when evaluating a city that is largely based upon day-to-day commutes.

Ultimately, I would like to be able to map the emergence of each transportation system from the time that Grand Central began construction in 1902. While this would be an ongoing project, by mapping the growth and emergence of each form of transportation we would eventually be able to overlap the systems and measure their efficiency by comparing the number of users per system or looking at increases in ticket purchases for example. Conversely, we could look at the decline in of any system as others arise and see why that is or was the case. Even further, we could try to make cross-correlations with car sales or gas prices. Being that Grand Central Station sees the largest amount of commuter traffic, this seems like the logical point of reference to depart from.

Being that it would take lots of time to map each transportation system, I would begin by mapping the railroad system and its growth from 1902 until today.

As previously mentioned Grand Central Station sees an inordinate amount of traffic on a daily basis and commuters rely on its efficiency and multi-modal transport in order to get from point A to point B. Sitting in the heart of New York City, this building, with its history alone is a landmark that continues to create a new history as each day passes. By mapping its routes and systems of transportation’s and overlapping them we can learn how to continually maximize the efficiency of the Grand Central Terminal as time goes on. People today are becoming more aware of the environment and less patient in terms of waiting in traffic. People are tired in the morning and tired in the evening and in most cases it is optimal for them to get from work to home and vice verca in the quickest, most comfortable way possible. This mapping project can help to ensure that progress.

From an aerial view at night, there is often only one thing you can see when looking down on the city – lights. The headlights and taillights of cars and buses, the off white lights of the bridges, the yellow from taxi cabs, the silver from the subways, or the red flashes from a train.

For the purposes of this map it would be oriented as a 360-degree topical view of Grand Central Station. From that point on the map, by identifying each transportation system with a colour I would map the routes that each one follows from this point to its final destination. The colours would become brighter in areas where there are the most passengers and fade at the points where there are the least. By overlapping each system, once they are all completed, we would be able to see where the most commuters are going, how they are getting there and what their preferred route is to that final location.

Formats of Media and/ or Artifacts

I have arranged a meeting with a representative from the New York Transit Museum Reading Room. This is where the archival collections of New York’s transit System lay. Available within these archives are engineering sketches, original drawings, and photo prints of the “Maintenance of Way Electrical Engineering Drawing Collection”. A map collection of New York’s transit history dating back to 1813 including 14 cubic feet including approx. 998 maps and related paper materials and finally the “Metro-North Collection” which includes 18 cubic feet, including 5,428 photographic prints, negatives, slides, and related paper materials.

From these materials I will be able to have a clearer understanding of the evolution of the New York transit systems. This will enable me to begin the mapping process of the electrification of the railroad that began with the building of New York’s Grand Central Station Terminal.

Jackson, KT. “THE PORT OF NEW YORK – A HISTORY OF THE RAIL AND TERMINAL SYSTEM FROM THE GRAND CENTRAL ELECTRIFICATION TO THE PRESENT – CONDIT,CW.” JOURNAL OF THE SOCIETY OF ARCHITECTURAL HISTORIANS 46.2 (1987): 198-99. Print.

“Demographics.” Grand Central Terminal. MTA. Web. 14 Sept. 2011.   <http://www.grandcentralterminal.com/info/demographics.cfm>.
________________________________________________________________________________
Reflection Post-Proposal:
After class on Wednesday I left feeling a little unsure of my project. While I still like my chosen topic, Grand Central Terminal, I realize more and more that there are many variables to consider in undertaking such a multi-faceted topic – and how would I be able to choose just one to focus on.
I began to consider what would be my ‘media’ angle – which I inconveniently neglected to specify and or figure out when deciding on this topic. What came to mind immediately was the signage of Grand Central and the ability for people – commuters or tourists – to navigate such a complex, fast moving space. An interesting experiment could be to try and navigate Grand Central using ones senses – ie. without sight or trying to converse in a language that isn’t predominantly english and see how easy or difficult it is to get from point A to point B.
It would also be interesting to interview the people who frequent the space – security, conductors, people who just hang out there, passengers, shop owners, information people or just general workers and tenants to see how their experiences their relate and differ.
It is difficult to hone in on one subject within a grand topic – however that is part of the excitement and endurance that comes with a project like this. I am interested to see what my end result is as well as everyone elses.