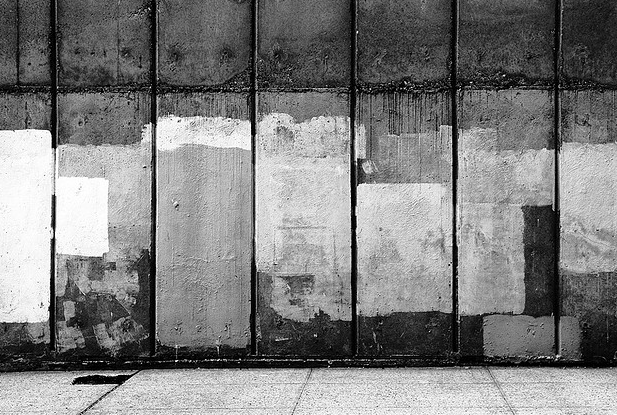 Graffiti in New York City plays the part in a well defined administrative feedback loop. After the street art is illegally applied to an urban surface, city administrators begin the process of recording, tracking, and removing it. A process that supports efficient administration and maintains record of measurable results, all in the fashion of today’s Smart City. Graffiti is identified and reported by the public through the city’s 311 service and by the city’s Street Conditions Observation Unit through regular patrol of the streets. As the publicly available data set on graffiti shows, each report of graffiti is given a geographic coordinate to help cleanup crews locate and remove the marking. However, this coordinate gives the graffiti a virtual presence that can be mapped and projected back on to the physical space – a transfer from one screen to another.

While this information system is efficient, it does not effectively reverse graffiti or keep urban spaces graffiti free. Instead, the city’s process retraces an abstraction of each particular graffiti unit on a variety of surfaces. It leaves a trace on the street: as paint over a wall that does not necessarily match the original color. And it leaves a trace on hard drives: a record of the graffiti in the form of meta data detailing coordinates, street name and number, governing police precinct, and the length of time the tag endured from identification to subsequent removal.

I propose in this project to follow New York City’s data set on graffiti as a guide to the city – a spontaneous, self generating map where every newly registered tag becomes a destination. I will use it to visit both sites where graffiti was recently reported, but also recently removed. The idea would be to collect photos of the graffiti and notes on its context in order to add dimension to the electronic trace produced by the city process of graffiti removal. With photos and details of the tags we can look for patterns in these temporal layers mapped on the city. Are some tags removed faster than others? Is there a discernible motion to the removal process as the cleaning trucks move across the city map? Where are the frictions and tensions – where does the city resist erasures and what affect does it have on the mechanism employed to perform it? What surfaces are the tags on and in what condition are those surfaces? What kind of domains or territories are defined by the identification and removal process? By analyzing images through image analysis tools, might we find spatial patterns in the present data set?

I aim to consider this process through the lens of Friedrich Kittler’s computer metaphor for the city. Graffiti and its removal is a write-rewrite process with a textually beyond the urban surface. My intention is not to focus on the cultural history of graffiti – its practitioners and their methods – but rather to foreground this write-rewrite information system. A system that operates on a unit of cultural expression that is site specific in a physical location, yet also extended into a mappable virtual sense. The unique opportunity here is to evaluate this system with current data on graffiti. An opportunity to do a kind of digital video recorder like capture of the city in process: to record, rewind, and replay a write-rewrite drama between the city and its people.

Quintero, N. “The Screen on the Street: Convergence and Agonic Coincidences between Graffiti and New Media Objects.” Artnodes, no. 7 (2007). http://www.uoc.edu/artnodes/7/dt/eng/quintero.pdf.