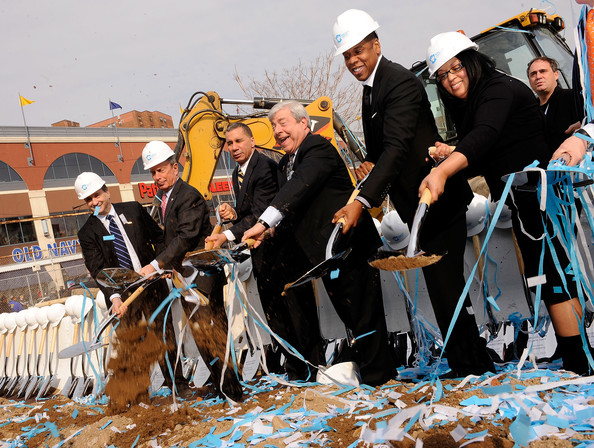 Before I get into the project proposal, if you know anyone who has participated in the Atlantic Yards dialogue (attended community meetings, made art about it, whatever) please get in touch! The more possible map points the better. coopd033@newschool

I propose to map the media actors who cover and have covered the development of Atlantic Yards in Brooklyn. My research will span from 2003, when the Newark Star-Ledger first reported Bruce Ranter’s plan to purchase the New Jersey Nets and move them to a new development in Brooklyn, to present, about one year from the completion of Atlantic Yards’ symbolic focus, Barclays Center. Relevant map points would include, where applicable to individual actors: the actor’s home residence, work site, places of convergence with other actors (meeting sites, sites of press conferences, locations of land being constructed/demolished/affected, etc.) interpreted within the context of media and communication.

As a start, some actors I’d include would be: bloggers like Norman Oder (Atlantic Yards Report), Steve and Lumi (No Land Grab), contributors to Atlantic Yards Watch (which is backed by civic organization BrooklynSpeaks), Aaron Naparstek (The Naparstek Post), Jonathan (Brooklyn Views, now dormant) and The Footprint Gazette (now dormant); the 52 members of the Develop Don’t Destroy Brooklyn advisory board; photographers Tracy Collins, Adrian Kinloch, Jonathan Barkey and artist Peter Krashes; filmmakers Suki Hawley and Michael Galinsky (Battle for Brooklyn) and Isabel Hill (Brooklyn Matters); the owner/curator of Flickr’s Atlantic Yards Webcam; The Civilians’ theater performance of “In The Footprint: The Battle Over Atlantic Yards.” Moving out from individual actors, I’ll map the meeting places of relevant institutions and committees, such as the Empire State Development, Forest City Ratner, the Atlantic Yards District Service Cabinet, Downtown Brooklyn Partnership and sites of community hearings, protests and other discussion forums. Certainly the Manhattan home of The New York Times tells a story, a property partially owned (42%), managed and developed by Atlantic Yards’ developer Forest City Ratner. The Atlantic Yards project was parodied in an episode of The Simpsons (S20E08)—does that have a ‘place’?

Significance to media studies seems relatively apparent: the development of Atlantic Yards engages a number of social and environmental justice issues, encompassing race, class and the built environment, and those issues have been engaged and shaped publicly and privately through the corporate news media, personal and professional bloggers, filmmakers and artists, public protests and community meetings, etc. While the content of media coverage surrounding Atlantic Yards is its own fragmented/contradictory/complicated story, I propose a more structural analysis via sites of those media forms, mapped across Brooklyn and New York. What can we learn from spatial origin of editorial content? Formal vs. informal, commercial vs. non-profit, governmental, religious and otherwise—where? And why there?

Mapping these actors right now is incredibly timely because construction on Atlantic Yards is still ongoing (aka under opposition), and because the media network may not be there to be analyzed in the same way after the Barclays Arena opens next fall.

For the URT project, I’ll map important sites of Atlantic Yards media actors, with supporting materials they’ve put forth into the Atlantic Yards media network. The photographer Tracy Collins lives here, for example, just three blocks from the construction site (hypothetically), and her studio is over here, and here’s a few of her photos, placed in the locations they were shot. Repeat this for other actors, forming networks that might one be apparent. The task is to locate the actors whose work is presented as sometimes placeless (blog commentary) and sometimes hyperlocal (Atlantic Yards Webcam) and sometimes both (documentary films, for examples). Map contributions will, in aggregate, include text from blogs, newspaper clippings, possibly my own interviews with these actors (Why did you do it this way? What would have you changed?), photographs, development maps, video, field recordings of construction noises (if I can find them, and I expect they exist) and committee meeting transcripts.

What this study ultimately proposes is an analysis of the connectedness of the forces behind Atlantic Yards’ media engagement, informed by the actors’ spatial material existence, in order to better understand how precisely the Atlantic Yards development unfolded the way it did. The implications of such a study would inform future actors in urban land disputes, and provide lessons for those fighting eminent domain, etc. and looking to best harness multimodal media—like that archived in the map—to fight back.