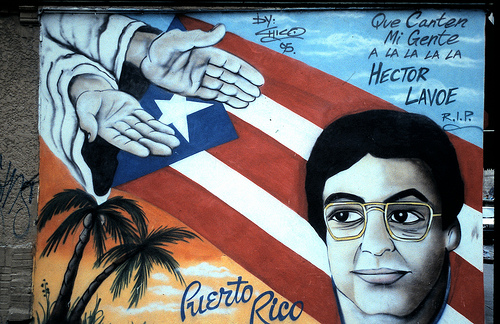 As an art form, street art and graffiti have had a stylistic resurgence in media during the past decade, although it can be argued that the artistic “fetishizing” of graffiti art has been present since 1975 when an exhibition at the Artist’s Space attempted to introduce graffiti to New York Galleries (Remeseira 286). Graffiti art has lent its aesthetic has been interpreted through various kinds of media over past decades, for example, its recent interpretation in works such as Shepard Fairey’s work in 2008 on Barack Obama’s campaign, or its celebration in graffiti artist Banksy’s 2010 documentary, Exit Through the Gift Shop. NYC’s Research Graffiti Lab has also done work in the past decade with forms of digital and interactive graffiti, developing tools such as the “Eyewriter”, which offers new insights on how people author space. Nonetheless, New York City has had a rich history in street art and graffiti, not only as an integral aesthetic to the city, but as an important narrative in everything from establishing community identity, to providing larger social commentary and disagreement.

Despite its multiple forms of cultural interpretation, this project intendeds to focus on graffiti art as a form of place specific literacy, and more specifically the act of graffiti as memorial in Latino communities in NYC.  Since much graffiti involves direct engagement with its environment, it is useful to contextually analyze graffiti art as “a performance of marking various points of contact between individual and the world in celebration of existence or as a declaration of resistance” (Bowen 1). Graffiti’s audience therefore becomes an act of bearing witness to another person’s existence in a certain special context.- a performative act in a physical space, and ephemeral commentary.

It is in this light that I am interested in cartographically representing street art as memorial in NYC.  Since graffiti is tied to place, the act of spatially representing works through space and time will hopefully generate new narratives of New York City’s Latino communities and culture that were not apparent when these works were seen separately in their places of origin. While many works have been done of the relevance of graffiti and street art in societies, no medium actually attempts to analyze street art as a larger social argument in the context of space and time- two characteristics that seem intrinsically relevant to graffiti as a medium.

For the purpose of this project, I intend to map used as memorials within Latino communities around NYC.  In Martha Cooper’s and Joseph Sciorra’s book, RIP Memorial Wall Art, they write,  “Latino artists play a predominant role in the development of the New York memorial tradition… the strong Latino presence reveals a historic precedent for the memorial tradition. The walls are updated version of roadside crosses” (Cooper and Sciorra 10). This is street art at its most contextualized- visual literacy engaged on a communal level, a personal level, and with its environment throughout a larger urban context.

Because records of graffiti are not usually archived, especially of this nature, most history revolves around oral histories, photograph collections, personal excavations, and gallery exhibits. Since this project will attempt to create a narrative of street art through time, I anticipate sources will be gathered through: oral interviews of people living in neighborhoods where this method of memorial is used and, potentially city archives of arrests of tagging and other documentation of historical street art, and personal photographic observation since a significant aspect of street art is personal site specific engagement. Finally studies by Arlene Davila and the use of folklore archives throughout the city could potentially prove useful as well in rounding out arguments, and providing clues of where to look.

Bowen, Tracey. “Reading Gestures and Reading Codes: The Visual Literacy of Graffiti as

Brighenti, Andrea. “At the Wall: Graffiti Writers, Urban Territoriality, and the Public

Deleuze, Gilles. “Postscripts of the Societies of Control”

Scheible, Jurgen and Timo Ojala. “MobiSpray: Mobile Phones as Virtual Spray Can for