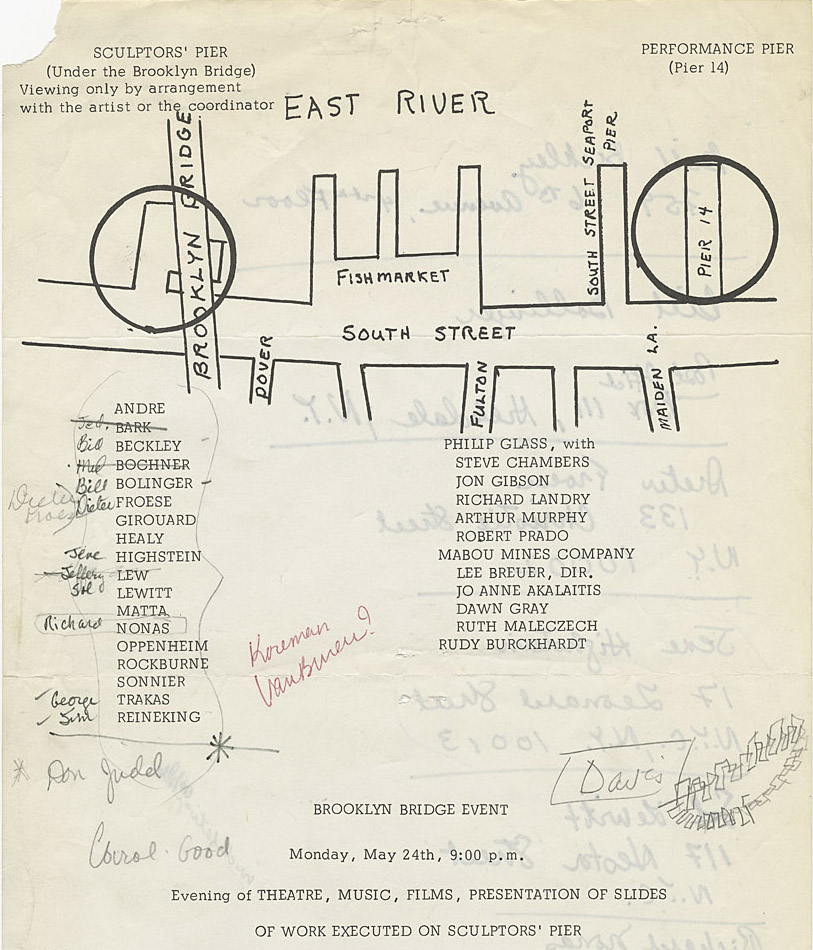 On Sunday October 9th, at 5 p.m., I took part in a 90 minute walking tour of the lower west side of Manhattan, examining the artists and art production of downtown’s passed art world. The tour was led by art historian Andrew Russeth for The Public School New York. We began our tour at Louis Nevelson Park and ended our tour in west SoHo. Russeth began by offering us John Cage Almond Cookies, a cookie which was made famous through the Merce Cunningham Dance Company.

Yoko Ono introduced Cage and Cunningham to a macrobiotic diet. The cookies are a reflection of it. Cage, was a composer, philosopher, poet, music artist and printmaker. He attended and later taught at the New School for Social Research, where he would later teach Richard Maxfield. Maxfield would go on to teach La Monte Young and George Maciunas. Russeth pointed out the location of Cages’s 326 Monroe Street apartment. He lived there in the 1940’s and early 1950’s; in 1953 the building was torn down.

Cage lived in something of an artist’s colony. Much of the work he produced throughout that time, and up until today remains controversial. He however, has been the influence behind countless artists and writers, and was undoubtably influential to Fluxus. I realized while on the tour, how important it may be to my project to include artists who came before Fluxus and after Fluxus. I also thought it might be important to include artists who were not directly associated with Fluxus, but were part of the downtown art scene during the years that Fluxus was prominent in New York.

Russeth followed the tour, by pointing out Jasper Johns and Robert Rauschenberg’s cold water flat on Front Street while telling us the infamous “ice in the drink story”, which landed Johns career. (Cold water flats were small apartments or rooms, which would only have a sink with cold water; bathroom and kitchen access was often located elsewhere in the building for bathing and cooking.) Robert Rauschenberg offered art dealer, Leo Castelli a drink during at his studio in the late 1950’s, Castelli asked for ice and Rauschenberg led Castelli downstairs to Johns apartment where the building shared a refrigerator. Castelli was awed by Johns flag, number, alphabet and target paintings which were on display. He offered Johns a solo show, and a month later with the encouragement from his wife offered Rauschenberg a show too. The apartment building where Johns and Rauschenberg inhabited would without question be included on my map. I also would like to collected slides of their work, photographs of the interior and exterior of the buildings and the location of where each of their solo shows were located.

She organized more than 20 artists and perfomances that included Carl Andre, Tina Girouard, Jeffrey Lew, Keith Sonnier, Gordon Matta-Clark, Jene Highstein, Sol LeWitt, Richard Norus and Dennis Oppenheim. Heiss was unable to get permission to host a gathering on the pier, so she filed permission for a four day film shoot (which she was given). Heiss has since, been celebrated in the alternative space movement, and would go on to become founder of P.S.1. Contemporary Arts Center. Our tour did not include a visit to the Brooklyn Bridge, but did include a visit to 108 Leonard Street, the Clock Tower Gallery in SoHo, where Art on the Air Radio is located, along with Heiss’ headquarters.

Russeth led us to 35 White Street, which was the last Barnett Newman Studio, and which is where Trisha Brown’s Roof Piece took place. Trisha Brown was a major component to Fluxus, and took part Maciunas’ 80 Wooster Cooperative.

Barnett Newman moved into 35 White Street in June 1968. Newman, an abstract expressionist who has been associated with Jackson Pollack, Lee Krasner, William Baziotes, David Hare, Robert Motherwell and Mark Rothko. Baziotes, Hare, Motherwell and Rothko established a cooperative art school in 1948, at 35 East 8th Street. Newman preceded Fluxus, and established himself prior to the influx of artists to SoHo and the Bowery during the early to mid-1960‘s.

On our tour we visited over a dozen locations, many of them I will include in my project. I found this walking tour to be extremely helpful. It helped me to visualize my project in a way I was not able to do up until now. It also made me realize how important it is to expand my field of study. As of now I have collected over two hundred addresses, which include apartments, studios, galleries, restaurants and places associated with downtown’s passed art world. I am concerned that if I expand my search too much, my map might appear diluted and lack a coherent argument. Finding a balance is the first challenged I am faced with.