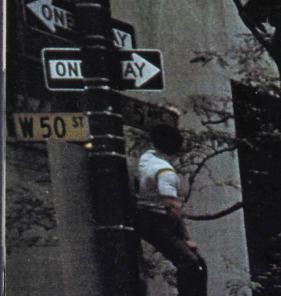 I had, what I thought, was a great idea.

My grandparents have almost every National Geographic since 1962, and an index in which I could search for various key words. I found two very promising issues, July 1964, “The World in New York City” and September 1981, “Manhattan-Images of the City”. I found the 1981 issue, and was lucky enough to spot this intersection in the midst of a very hectic 1979 crowd at St. Patrick’s Cathedral waiting to see the Pope. But of all the issues that they have, musting up in their basement, the July 1964 was missing. (They did have every other month of that year but somehow not July.) Here is my first chance to confront a setback and so I thought it worthy to document!

First I searched the National Geographic website archives. With many magazines (Harper’s, The Atlantic) it’s possible to gain full access to the archives if you are a subscriber. But this is not so with the National Geographic. Their archives are public but only go back to 2005. So then I searched Bobcat and all the library sites. The problem was that they did not have that specific issue, even in their physical archives. I sent an email question to the librarian at the New School, explained the situation and asked what advice or information he/she might have for me. I searched ebay and found that for under ten dollars, I could just buy it. (Of course I don’t even know if it would be helpful to me. I’m really just blindly searching for old photographs at this point.)

That’s when I realized that I need a better system. I found a decent picture from the 1981 National Geographic (I scanned it from the magazine and posted it here.) And I found another picture on ebay that I could use, then one on the AP periodical on the library website. But I don’t yet have a strategy or even solid parameters for how and exactly what I’m looking for. This needs to be addressed before I go too much further down these potentially blind and definitely time consuming alleys!