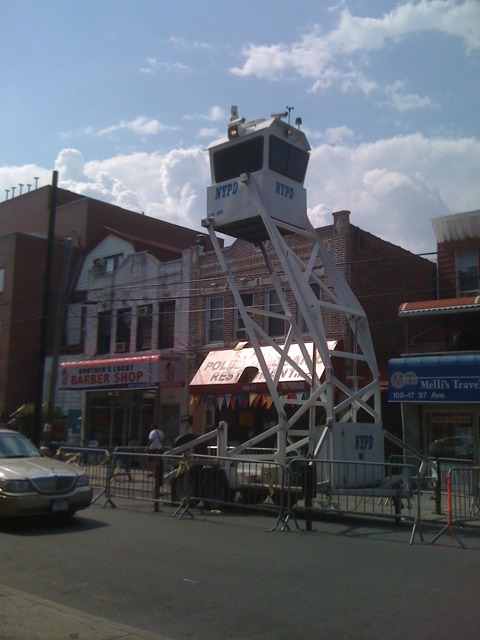 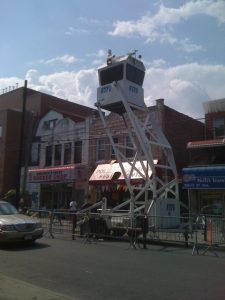 One hot summer day in August, I was walking along the 37th Avenue in North Corona, Queens.  I think it was somewhere between 100th Street and 103rd Street.  An invasive looking surveillance tower of NYPD was there, in the very middle of the neighborhood.  I couldn’t see anything special around this area.  Everything seemed mundane, at least to me, with small neighborhood stores and people hanging out in the street corners.  There’s nothing like a governmental building, industrial plants, or crucial economic area which might need a special ‘protection’.  The tower was definitely for surveillance on people living and working in this neighborhood.  It was literally a panopticon standing among people who are not even criminals.  (NYPD might say it is for potential criminals)  This scene had a strong impact on me.  How terrible it is to have such a thing in the neighborhood?  I think it was a critical moment for me to engage in this project.  Later, I learned that many youth and young adults living in Corona often stopped by cops without clear reasons and many of them got harassed by them.  The web of surveillance in this neighborhood covers the everyday life and intervenes in a micro level.

However, this web of surveillance is not only for a small area of Corona.  It is a part of wired infrastructure for the purpose of surveillance blanketing all over the city.  Since 9 11, NYPD and the Homeland Security Department have significantly increased budget for developing the surveillance network.  Civil societies concern the side effects of it – limitation on free speech and political activity and violation of privacy.  New York City Liberties Union has conducted a research on CCTVs and surveillance cameras located in Manhattan and sued NYPD for the massive surveillance in the Lower Manhattan in 2008.

Regardless of efforts to bring a discussion on the issue of surveillance, the expansion of the surveillance network is still ongoing, adopting the latest high tech apparatuses.  A director of policy and planning for NYPD’s Counterterrorism Bureau, Jessica Tisch, has announced that their system will be better than London’s, the city notorious for having too many CCTVs, by utilizing a sophisticated software algorithms that enables automatic reaction to “potentially suspicious” pictures and by reducing the processes for accessing data so that NYPD reacts to suspicions in “real time”.  (“NYPD Developing CCTV Camera System That Will Be Better Than London’s”, U.S. News, May 13, 2010)

In this project, I would like to take a critical approach to the issue of surveillance, particularly based in Corona, Queens.  I consider the whole system of surveillance a NETWORK that has a head office that manages collected information (NYPD database center in the headquarter building), communication channels, and many regional offices.  Although it is highly automated system, it cannot guarantee the so-called objectiveness.  The network is never free from socio-economic forces.  See the recent example: JPMorgan Chase bank donated money to NYPD for purchasing “1,000 new patrol car laptops, as well as security monitoring software in the NYPD’s main data center” (http://www.jpmorganchase.com/corporate/Home/article/ny-13.htm) while Wall Street Protests take place.  In addition, as we can notice from Tisch’s comment, the standard for operating the network is subtle.  Who decide what or who is “potentially suspicious”?  For example, thinking that the racial profiling is still a huge issue for NYPD and Counterterrorism in the U.S. at large, the operation of the network cannot free from the existing prejudices in the society.  In this context, I find that the presence of the mobile surveillance tower in Corona problematic.  Why not the Upper West Side but Corona?  The concerns that I have in this project is not just about freedom of speech and violation of privacy due to surveillance.  Rather, I want to scrutinize the way in which the ambiguous operation of the surveillance network affects the everyday life in a comparably discriminated immigrant neighborhood in New York City.  The subtle feeling of being considered as criminal or being considered as terrorist in the everyday life demarcates the life quality.  Main inquiry in this project would be; how the physical infrastructure of the surveillance technology distributed in urban area? And how often residents encounter them?

This project aims to visualize the infrastructure of NYPD’s surveillance network, which is sometimes not much visible without paying attentions.  I will investigate material networks including not only the high-tech facilities such as The Real Time Crime Center and database on the 8th floor of NYPD head quarter, CCTVs, mobile surveillance towers, cables for transmitting information and such, but also the low-tech nods such as police officers, radio and vehicles.  By mapping each location of them, I would like to emphasize the way in which the network intervenes our everyday life with or without our recognition.  Many part of the research would be done by fieldwork – walking with good eyes and ears and taking records of my route and time period.  It will involve field recording and taking pictures as well.  I might interview people living in Corona for their experiences of surveillance.

Galloway, A. and Thacker, E. 2007. The Exploit: A Theory of Networks, University of Minnesota Press.