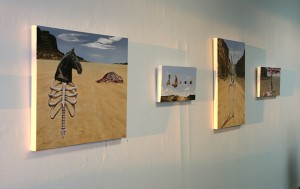 Free and open to the public

This talk will be an experiment and a trip into the archives of ethology, cybernetics, and neuro-science.  Following the strange curatorial habits of individuals ranging from Karl Von Frisch and Warren McCulloch, I trace the scientific effort traversing to make sense perception, itself, something that can be curated, stored, and archived in the interest  of making thought and perception an algorithm. In the left over films and circuitous diagrams that remain is a  mound of sentimental and affective detrius that continues to inspire the way we build machines, think of ourselves, and see the world.

Orit Halpern is a historian of science and a media theorist currently working as an assistant professor at The New School for Social Research. Prof. Halpern works on histories of perception, representation, and new media. Prof. Halpern’s current book is a historical and philosophical excavation into the relationship between the archive, memory, and perception in digital systems. Using the post-war science of cybernetics—the study of communication and control—as a point of departure, Prof. Halpern traces out how early engineers and architects of human-machine interaction, such as Norbert Wiener and Warren McCulloch, were informed by, and reformulated, different theoretical and technical practices from 19th and early 20th century film, psychology, psychoanalysis, design, and philosophy. Through this practice, Prof. Halpern charts the relationship between contemporary obsessions with archiving and interactivity in digital systems to previous modernist concerns with temporality, representation, and memory.