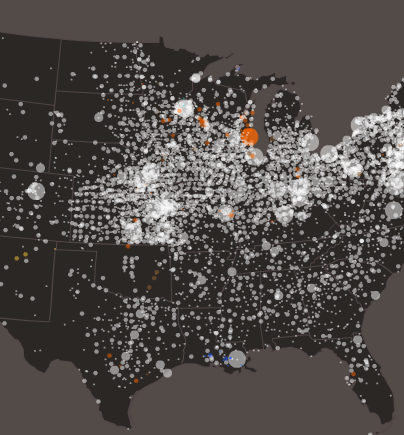 “It is the map that precedes the territory,” says Jean Baudrillard. There are few greater examples of this adage in practice than historical maps of the United States. As in the Rural West Initiative’s “The Growth of Newspapers Across the US: 1690-2011”, the continental United States is found fully realized by 1690 as a set of states with clear border demarcations. But there is a good reason for the map to be wrong, the map is telling a spatial story.

The map measures up well to the criteria defined by Harvard’s Elements of Cartographic Style. The formal elements are all here or within the frame of the page. The title, legend, labels, citations, and caption are clear and concise. The contextual framework of the map also measures up. The theme of the data portrayed cannot be confused for the map. The dots are suspended over a still, shadowy outline of the country we recognize today. As the user navigates the map, the theme moves across the set stage and a cloudy outline of a historical space begins to emerge.

If the parimap of rigid state and national lines weren’t enough to remind one of Manifest Destiny, the epimap of articles on the “rural West” and Frederick Jackson Turner’s Frontier Thesis help the user understand the contextual framework of a map that charts the rise and fall of newspapers in the United States. The typeface and inky dark color template of the map evoke the spirit of an early age of print, whose supposed heyday in the early 1900s coincides with the establishment of the “rural West” in the public imagination. Seemingly unrelated landscapes are brought together by a space of muted hues roaming between flickering paper lights.

Recognizing that a contextual framework is necessary for an evocative argument, or rather a spatial story, let us consider a critique that might expand the criteria to add a dynamic to the basemap that doesn’t compromise coherence. I propose to do this by introducing to the map design criteria the task oriented navigation criteria of information visualization theory.

“Overview first, zoom and filter, then details on demand.” This is what Ben Schneiderman calls the Visual Information-Seeking Mantra and it reflects how information visualizations are navigated for understanding and use. The map begins clearly at this overview level: we see a map and an adjustable timeline. Dragging the beveled arrow under the timeline gives users the impression of “the Growth of Newspapers Across the US”. To the right of the map are cue cards that allow one to navigate back and forth between the sampled dates. These also form an overview of the media landscape within a period of time.

Having familiarized ourselves with the map and the argument of the data presented, we move in with the zoom and filter function. Unfortunately, zooming into the newspaper landscape does not render greater detail. The dots obscure coherence by getting larger and no longer match the key in the legend. Retaining their size, we may have been able to gain a better sense of newspaper densities within smaller regions of the map. The filter function, however, is far more helpful. We can filter publications by language or by the frequency of the publication. This function reveals some interesting patterns such as the quick rise and fall of Swedish language newspapers between 1880 and the early 1900s. Yet, one wonders if there are not more opportunities for filtering the data, such as filtering by select cities for comparison or changing the size of the dots to represent combined circulation instead of number of publications.

The user is able to drill down further and get details-on-demand by clicking on any individual one of the dots on the map. Selecting a dot reveals in the details pane below the map a list of the publications corresponding with the point. Here we can click on any one of the publications to get further details on it by the electronic record maintained by the Library of Congress. This level of detail that links out to individual records held by the source of the visualization’s constituting data set should make the map useful for researchers in filtering and selecting publications for further study.

Schneiderman classifies overview, zoom, filter, and details-on-demand as part of an expanding list of tasks that organizes data by the problems that users are trying to solve. These tasks, become part of the contextual framework. As such, it should free the basemap to be redefined so that, as Alison Sant puts it, “we can begin to use database driven maps to understand place within a system of relations determined by their relevance to our queries, rather than their geographic location.” Clear tasks help stabilize the picture where the basemap is movement.

The solution may be just another layer. A layer where the boundaries are mobile element intersecting with the growth of newspapers. Yet, it may also be another geographic system altogether, one from an earlier period. The power of database driven maps is that the integrity of the records can be made while all the rules of the visualization change. The task brings the coherent framework. The Growth of Newspaper’s map shows newspapers as a hidden force shaping the contours of the the “rural West” imaginary, but how deep can this visual analysis penetrate without exchanging the basemap for that of progressive European settlement or the regression of Native American territories?

For projects developed on the Urban Research Tool, the lesson here to be learned is that spatial stories require places to be played. To make maps that are query oriented, the time variable is as important as the place. Maintaining coherence through task and design we can make poetic spatial stories with no end to the possible redefinition of the basemap. A prototype map of the graffiti removal process could even involve remapping the physical network infrastructure to tell a spatial story. The picture files of graffiti could be placed on servers far from the city. Retrieved through an Augmented Reality application, the images could be projected right back on to the same surfaces where the graffiti was erased by the city. This would weave the mechanism of graffiti removal to the mechanism of electronic storage and transmission. Storing up traces of the urban frontier in a physical place imagined to be the “rural West”. The city of the near past transforms into a projection of the “rural West” imaginary.

Shneiderman, Ben. “The Eyes Have It: A Task by Data Type Taxonomy for Information Visualizations.” In Proceedings of the 1996 IEEE Symposium on Visual Languages, 336–. Washington, DC, USA: IEEE Computer Society, 1996.