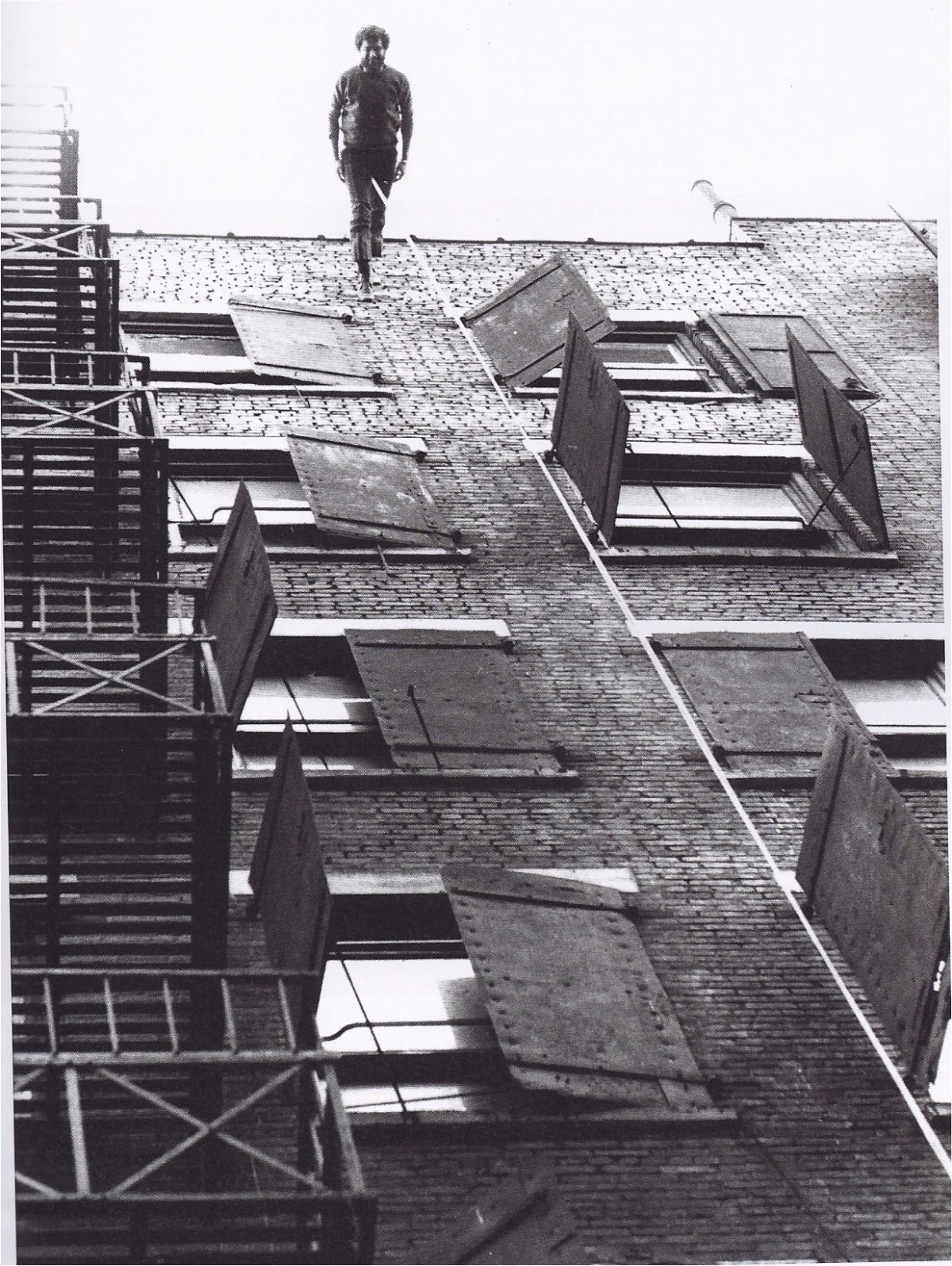 On Saturday, October 15th at 11 a.m., I joined writer Rosyln Bernstein and Shael Shapiro on a walking tour of SoHo, examining the presence of George Maciunas and Fluxus. Bernstein and Shapiro co-authored the book, “Illegal Living”, which traces the history of artists and art production in SoHo, beginning at 80 Wooster. Bernstein, is a professor of journalism and creative writing at Baruch College (CUNY) and Shapiro, was an early resident of 80 Wooster and currently works as an architect. Shapiro has lived, with his wife in SoHo (Bernstein) for over 40 years. He was a pioneer in SoHo, and was personally involved in many of the Fluxus events. In 1971, at the height of the Fluxus movement, Shapiro assisted Maciunas in the production of a Yoko Ono/John Lennon museum show, and he then worked for Lennon and Ono for over a year (Bernstein & Shapiro 300). He worked with Maciunas, as a consultant for architectural matters regarding 80 Wooster (Fales Library at New York University has acquired Shapiro’s personal papers relating to the development of SoHo and the conversion of loft buildings) (Bernstein & Shapiro 300). Being one of the longest residences in SoHo, and having been greatly involved in the Fluxus, I was very excited to have had the opportunity to join Shapiro, along with his wife on a tour of SoHo. The tour was organized by they Grey Art Gallery at NYU; the gallery is currently hosting a show dedicated to the history of Fluxus.

Shapiro and Bernstein led a group of twenty five art enthusiasts, throughout SoHo beginning and ending at 80 Wooster. According to Bernstein, 80 Wooster was the first successful Flux-house (II). The original location for Flux-house was 16-18 Greene Street. Before embarking on our tour of SoHo, Bernstein reminded Shapiro to discuss film maker Jonas Mekas, before proceeding to our next location. Mekas, was a long time friend of Maciunas. They met one another through Almus Salcius, a journalist at Columbia University. Mekas and Maciunas both Lithuanians shared more than a World War II experience, they shared a common cultural heritage. “The spirit of cooperative thinking permeated the region”, argues Bernstein and Shaprio (Bernstein & Shapiro 76). Like Maciunas, Mekas had the cooperative spirit, transferring it in America to the Film-maker’s cooperative which he founded in 1962 to help independent film-makers. In 1964 he founded the Film-maker’s Cinematheque and in 1970 he established the Anthology Film Archives – both which flourished at 80 Wooster (Bernstein & Shaprio 76). Mekas, like Maciunas had a grand vision. The Film-maker’s Cinematheque was to serve “as a center for the showing and promoting of non-commercial, avant-garde, cinema and the best of the commercial film classic”, according to Mekas (Bernstein & Shapiro 76). It was to publish books and magazines on cinema (including Film Culture, a quarterly magazine which first appearing in January 1955), assist grants to film makers, and “intervene as amicus curiae in court and appellate proceedings involving motion picture censorship and licensing questions” (Bernstein & Shaprio 77).

When Maciunas began to look for building in 1966-1967, Mekas jumped on the opportunity. He said “I told him that I would take the ground two floors of 80 Wooster for and 16/18 Greene Street for two showcases and I made a deposit” (Bernstein & Shapiro). Maciunas saw Cinematheque as an integral part of his artists cooperative vision, according to Bernstein and Shapiro. Mekas agreed to pay $8,000 for the ground floor and the basement to house Cinematheque I. Mekas wrote, “Cinematheque I, will be able to premiere all avant-garde  works without fear of not covering rent” (Bernstein & Shaprio 78). The space for Cinematheque II was to be located at 18 Greene Street, a building that was supposed to be Flux-house I. Mekas, eventually moved his space for Cinematheque II at the Public Theater on Lafayette Street. At 80 Wooster, Mekas found a raw space previously occupied by the Miller Cardboard Company (Bernstein & Shapiro 80). On December 14, 1967, Mekas ran his first film ad for Film-maker’s Cinematheque I at 80 Wooster. “80 Wooster (Where the Spring St. and Wooster St. meet. By subway: Spring St. Station, three blocks south of Bleeker St. Cinema).” It also listed an entrance fee of $1.50, with the parenthetical that the cashier would admit patrons for $1 if they could not afford the regular fee.

Bernstein pointed out in June 1970, a New Yorker reporter on a walking tour of SoHo passed by 80 Wooster to discover two Flux-workers performing the Measure at the newly opened Flux Clinic. The reporter was asked to fill out a form that asked for Flux-patient’s Wrong Address, his preferred Manner and Place of his Death, his preferred Place of Birth, his Disliked Pains, and his Liked Pains. Maciunas, along with the other Flux-workers would take measurements. The reporter said, Maciunas, “Measured Maximum Width of Smile, Extended TOngue, Depth of Forefinger, and Distance to Nearest Water” (Bernstein & Shapiro 102). He also measured the “Minimum Sway at Head”, which he said “Measures How Much You Sway in Life”.

Before proceeding to our next location, Shapiro stopped to tell us about Trisha Brown’s Walking Down the Side of a Building, on April 18th, 1970; which her husband at the time Joe Schlichter performed. Upon his divorce, he told Shapiro, that he should not have been surprised his marriage was coming to an end after he performed at her direction, Walking Down the Side of a Building. The performance required Schlichter to walk, in a harness down the side of 80 Wooster. He was badly bruised following the performance.

Our tour continued, and Shapiro pointed out the location of Food. Food opened in late 1971 at 127 Prince Street (at the corner of Wooster). The restaurant opened and owned by artist Gordon Matta-Clark, and his girlfriend Jane Crawford. Food was, Soho’s first real restaurant. The restaurant was at the epicenter of the neighborhood, employing artists living south of Houston Street (Bernstein & Shapiro 175). Food opened in a converted Puerto Rican luncheonette and was immediately successful (Bernstein and Shapiro 175). Today, Lucky Brand sits where Food once did. A Playgroup also opened in the basement of 127 Prince Street. The Playgroup was founded by Judy Reichler; it was a place where mothers with infants the same age would meet. Shapiro and Bernstein reminded us how community driven SoHo was during the 1960s and 1970s.

Paula Cooper’s Gallery, was the next stop on our tour at 155 Wooster Street. It opened in 1968, and was the first gallery to open in SoHo. It opened with an exhibition to benefit the Student Mobilization Committee to End the War in Vietnam. The show included works by Carl Andre, Dan Flavin, Donald Judd, Robert Mangold and Robert Ryman, among others, as well as Sol LeWitt’s first wall drawing (Paula Copper Gallery). “When you’re young,” Paula Cooper said, “It seems you do so much in a short time. I look back and I think: how could I have possibly done all that? But anyway, yes, I worked in a gallery and it was a very small world” (Miller).

The community at the time was very small. Most of the artists living in SoHo, were illegally living there. Due to it being illegal to live there, everyone relied on one another to keep the community alive. Cooperative living expanded outside of 80 Wooster; it was a way of life embraced by the artists community living in SoHo at the time. Art production resulted in a creation of a new form of art, creating a hybrid form of intermedia. Collectiveness was valued, rather than individualism. Fluxus was to be “against art as a vehicle for promoting artists’ ego”. The key concepts for Maciunas, were “anti-individualism” and “anti-Europeanism”.

Our next stop was 359 Canal Street. When Maciunas returned to the United States, after living in Europe and before establishing 80 Wooster Street he lived at 359 Canal Street. 359 Canal Street, was also where Dick Higgins had his studio and where Yoko Ono and John Lennon lived. Maciunas organized in the storefront of 359 Canal Street organized Saturday night gatherings (Knowles). The performance “Two Inches” was preformed by Alison Knowles and Ben Vautier; it required them to take a roll of ribbon two inches wide and stretch it across the street raising it from either side to stop traffic. On April 25, 1964, Solo for Violin, Viola, Cello, or Contrabass, was performed by George Brecht at 359 Canal Street. For my project 359 Canal Street appears to be a significant address to focus on.

Due to the large crowd and the lack of time, my tour was more enjoyable then educational. I learned a handful of new things about SoHo, but much of what they discussed was in their book (which I had already read). Having the opportunity to meet Bernstein and Shapiro, was quite enjoyable. At this point, I have done a significant amount of research, and found many of the first settlers of SoHo and the Lower Eastside are eager to talk candidly about their early experiences. Information about the community is available in books, articles, papers, videos, interviews, walking tours and lectures. I have yet to find information about my project which is restricted. At the time, the community operated in an anarchic fashion, where there was no hierarchy; which is possibly why information regarding the community is so easily availably and why everything has been extensively documented. Following my tour, I took all of the addresses we visited and double checked all of the facts, either from Bernstein and Shapiro’s book or other sources. I did find they did lay out a good map, and provided a good set of bones for my project.

Now that I have collected the addresses I would like to include for my project, and have a better understanding of my territory I now am in the process of collecting information for those addresses. I have decided to focus on SoHo, but will map points outside of SoHo which are deemed significant to my project. For example, I would like to include Alanna Heiss’ Clock Tower Gallery in Tribeca, or her Brooklyn Bridge Show. Mapping nearly two hundred addresses, is short of impossible. I will map as many as I can, but will use text, images and documents only on locations which strongly support my argument.