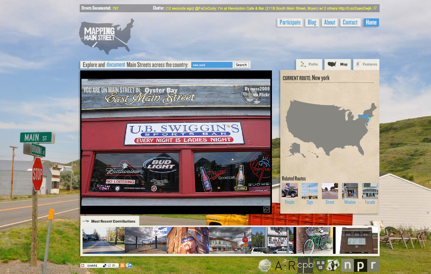 “Once you start looking, you’ll notice Main Streets are everywhere and tell all kinds of stories.” (Mapping Main Street)

Mapping Main Street (MMS), a collaborative documentary media project, illuminates diverse cultural landscapes across the United States.  This project aims to create “a new map of the country through stories, photos and videos”, focusing on Main Streets. A group of artists and academics gather together for this ambitious project – mapping more than ten thousands streets – and make this platform open to the public so that general public can also participate in the production of the project.  In this light, Shapins, one of main creators, calls this project “collaborative database documentary”, which “uses a database of all streets named Main in the United States to critique popular political rhetoric and generate a new form of urban exploration and online documentary.”  (Shapins, 2)  So far, they have documented more than 700 among 10,466 Main Streets in the United States.

The reason why MMS chose “Main Street” is not clearly stated on the website.  As a person who does not have a cultural reference to nuanced understanding of “Main Street”, I had to perform a preliminary research on the socio-cultural connotations and significance of “Main Street”.  According to a dictionary, Main Street is “the principal thoroughfare, especially through the business district, in a small town.” (The American Heritage® Dictionary of the English Language)  It refers “a place of traditional values” and “the interests of everyday working-class and small business owners”, which “is sometimes contrasted with “Wall Street”, symbolizing the interests of corporate capitalism”[1]. (Wikipedia)  National Trust For Historic Preservation has been funding communities based on Main Street for three decades, because it sees Main Street as a place “to learn about our past, explores our culture, or discover our identity”. (http://www.preservationnation.org/main-street/about-main-street/)   Thus, Main Street, in this context of the U.S. urban history, could be understood as a place of nostalgia, in which a symbolic and cultural value of the past is held.  That might be the reason why MMS sometimes comes across ruins or abandoned buildings on Main Streets.  In this sense, it seems plausible that the project chose Main Streets for “re-mapping” the U.S., tracing histories of development and under-development in small towns.

The most salient feature of this project is its open access through which the general public can build the database of main streets and share their perspectives along with main contributors’ works.  It is not always easy to develop a ‘participatory’ project without attracting public attentions.  The team of MMS has been not only contributing a good amount of contents themselves like many other ‘participatory’ projects do, but also utilizes existing cultural organizations and educational institutions such as NPR, public high schools, colleges, etc.  This way, MMS inspires more ordinary people’s interests in man streets and yields their participation in the project.  Through this open and collaborative process, MMS has successfully built the rich database of Main Streets which will base a documentary project.  On the other hand, the process itself also provides a forum for individual contributors so that they can reflect historical and cultural significance of the main streets of their local towns and to engage a critical, creative collaborative project.  What is fascinating about this project is, while MMS becomes richer with participations, the contributors also can use MMS as an opportunity for share their works with wider audiences.

Then, how to participate in this project?  It is relatively simple and easy. Rather than designing a new structure for uploading media contents, MMS utilizes existing popular media platforms that the participants might be already familiar with.  Participants are required to use flickr.com and vimeo.com to join the “Mapping Main Street group”.  By following the instruction of the MMS, one can tag his or her contents which are automatically linked to the MMS.  So far, more than 400 participants have contributed more than 8,000 photographs.  About 40 participants have contributed about 90 videos[2]. MMS invites various formats and genres of storytelling, including audio documentary, oral histories, documentary films, simple video clips, photo portraits, landscape photos, photo documentary, etc.  Their method of data collection resonates well with the project’s goal: “once you start looking, you’ll notice Main Streets are everywhere and tell all kinds of stories.”  In short, MMS lets participants develop a particular database on Main Streets in which they deliver their personal impression or memories of Main Street. 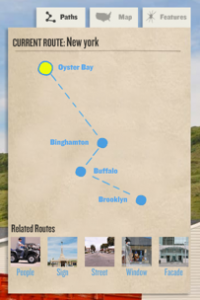 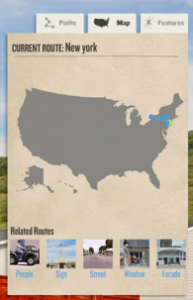 I think the design of the base maps reveals the way in which MMS team conceptualizes the space.  Although it is about ‘mapping’, it does not depend on locative media like Google Map that are often considered ‘precise’ and ‘scientific’.  Rather, as shown above, it presents the geographical locations in a ‘vague’ way just like our vague sense of locations.  In addition, it gives geographical context to specific Main Streets by showing the locations on the map of the whole U.S. territory.  Thus, I think that the maps in MMS reflect human-centered imagination upon the landscape and MMS does not naturalize such perception by not using scientific maps.

Thus, I would say Mapping Main Street is about accumulating database based on cultural imagination rather than mapping.  In other words, map in this project is a platform for sharing ideas rather than an indicator of ‘real’ things.  There arethree ways of navigating this project; First, one can search through names of specific town or the adjacent areas ; Second, one can examine the featured project in the website; or one can follow routes set through by participants’ tagging.  In other words, MMS is structured via geographical locations, thematic exploration and wide range of interests from individual contributors.

MMS stimulates one’s sensory and bodily experience.  By minimizing written contents MMS focuses on affective transmission of “main streets”, which allows users to grasp the cultural and social history of the landscape in embodied sense.  The mode of enjoying MMS would be like the way we enjoy artworks rather than like reading written materials.  It minimized written information so that users can focus on what they are seeing or hearing.  Users can always maximize the window of the content over the website and it helps users to concentrate on the very materials.

Now, let’s get back to the Shapins’ statement regarding this project.  Does MMS “critique[s] popular political rhetoric” regarding Main Streets?  Does MMS “generate[s] a new form of urban exploration and online documentary? (Shapins, 2)  I agree with the latter proposition.  MMS is a “collaborative database documentary” which allows different stories stay together. Apart from conventional urban representations, it is non-linear and multi-layered documentary.  It allows plural perspectives and interpretations.  However, because of this nature, MMS might not be necessarily converged into a critique of popular political rhetoric.

In short, MMS is definitely a wonderful example of compiling diverse creative works into one platform for exploring urban landscapes.

[1] Interestingly, there is a chant at Occupy Wall Street protest related to this – “Wall Street is Bailed Out, Main Street Sold Out”

[2] I didn’t count how many of them are videos and how many are audios.