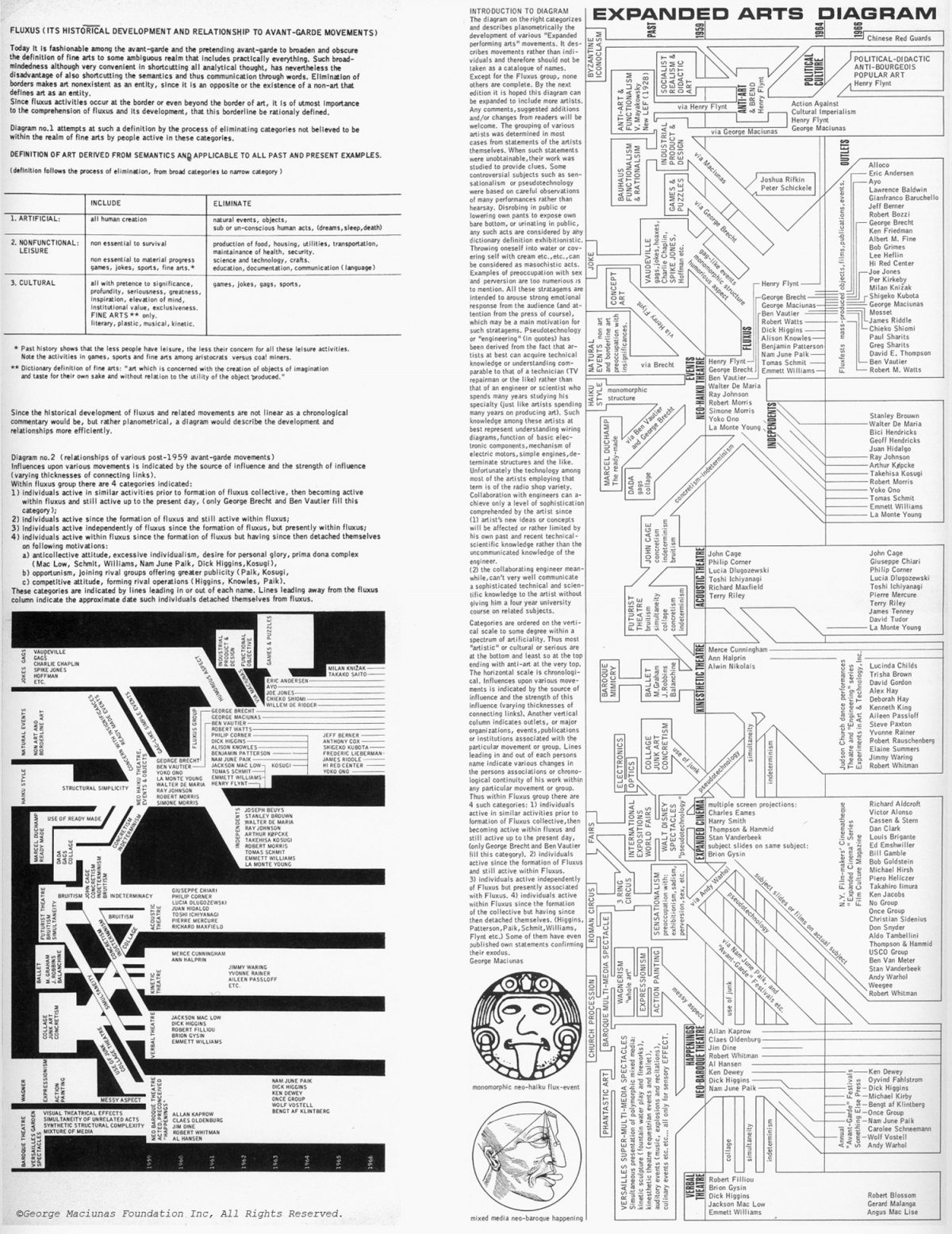 Opinions of what Fluxus is or once was differs greatly, from Fluxus insiders and outside observers. In the 1960s Fluxus established itself as an international avant-garde movement active in the border between art and non art. Fluxus included two forms of expression, the events which were often performances and the Flux-kits with editions of various artists (Schmidt-Burkhardt 10). Maciunas produced illustrations of what he was aiming for in various diagrams. He referred to these charts as “learning machines”. The original notion, can be traced back to the enlightenment. Maciunas was a perfectionist, especially in regards to his illustrations.

When I initially came across his collection of illustrations, I was very impressed not only by his attention to detail, but by the amount of research he incorporated into his map. Maciunas had degrees in graphic design and architecture from Cooper Union, in architecture and musicology from the Carnegie Institute, and an art history degree from New York University. I found his Expanded Arts Diagram to be especially useful for my project. The EAD (Expanded Arts Diagram), was issued at the end of 1966. It was printed on the back of the Fluxfest Sale Flyer (roughly 2,000 were printed), and they were also printed in New York Magazine, Film Culture; Film Culture’s winter issue was dedicated to Maciunas (Schmidt-Burkhardt 53).

Out of the EAD, emerged the Diagram of the Historical Development of Fluxus and Four Dimensional [sic], Aural Optic, Olfactory, Epithelial and Tactile Art Forms as a two part poster, which he spent seven years working on, and he continued to work on after it was printed (Schmidt-Burkhardt 58). He wanted to produce the ultimate design. His anxiety combined with his obsessive and perfectionistic personality motivated him to invest more and more time into his project. The chart documented the global aspiration of Fluxus; the chart was never complete for Maciunas and remained an ongoing project until his death.

While researching Maciunas’ Expanded Art Diagram, I found he was an inspiration behind other mapping projects, including the Expanded Cinema Diagram by Duncan White. Both Maciunas’ Expanded Art Diagram and White’s Expanded Cinema Map are “meant to give a sense of various histories, connections, and developments that make up the polymorphous nature of practices associated with” expanded art or cinema (White). My main objective has been to examine the presence of Fluxus in SoHo, it also has been to understand where Fluxus fits into New York’s passed downtown art world. Artists such as Rothko, Rauschenberg, Johns, and Motherwell established themselves in lower Manhattan as artists living and working in close proximity to one another. They contributed to a new form of art, known as abstract expressionism. Did they influence Fluxus? How did their work differ from Fluxus? Rauschenberg’s work has always been more anti-art then art. His Cardboard Series encapsulates the notions of anti-art which emerged out of 1967. By 1967 Fluxus established itself as an art movement. What influence was Fluxus having on Rauschenberg and other pre-Fluxus artists in New York at the time? The Expanded Cinema Diagram and the Expanded Arts Diagram encourage broad perspectives. Understanding these relationships is crucial in order to create a good map. On the contrary, the map itself will help me to understand the relationships I am attempting to map better. I want to incorporate the information I found on Maciunas’ maps to my map, I also would like to map when and where he created his series of maps. Creating a network, rather then a collection of addresses is my ultimate objective for my project.