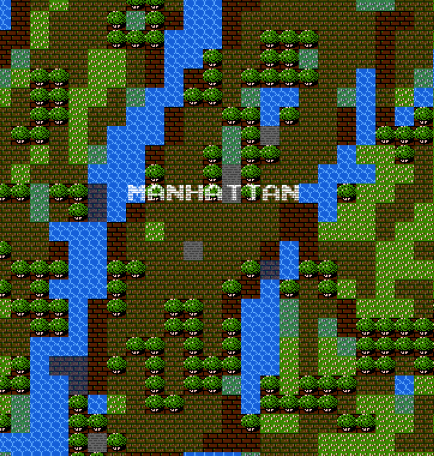 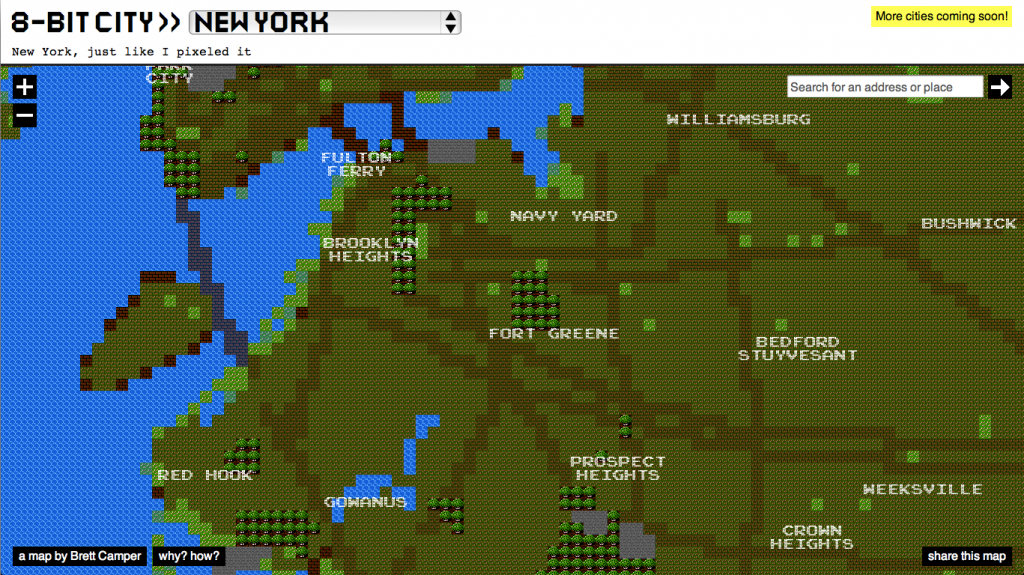 8-Bit NYC is, in the words of its creator Brett Camper, “a lo-fi web map of New York City, inspired by 8-bit video games.” Camper created a rendering engine that analyzes 16×16 pixel tiles of the OpenStreetMap to determine the individual tiles’ content (a road, a park, etc.) and replace it with the appropriate 8-bit style bitmap tile. 8-Bit NYC can be considered “fake 8-bit” in the sense that it essentially takes higher fidelity OpenStreet maps and down-samples them, effectively stripping information that was once available.

In its choice of colors and tile textures, 8-Bit NYC renders urban as rural. When viewed from the furthest allowable distance, 8-Bit Manhattan is recast in a palette of earth tones, with only a faint spattering of brick patterns and three or four gray tiles suggesting perhaps rocks. Places like Greenwich Village appear distinctly more village-like. In “Things Visible and Invisible” Jeanne Haffner writes, “Most fundamentally, mapping illustrates where elements of what we choose to include under the umbrella term ‘infrastructure’ are currently located or planned.” But does 8-Bit NYC this suggest a creative dialing back of the clock of New York’s infrastructure—highways and side streets are presented in identical brick tiles, for example, and subways stops aren’t displayed—amounting to an infrastructure disavowal, or does it, by simplifying these elements, bring basic structures into focus? Because Manhattan is only wholly visible from the furthest-out level of zoom, at which point it’s jagged corners render the island quite abstract, and because it’s largely indecipherable at middle levels of zoom, where too-similar patterns make it difficult to discern tiles with streets and those without, I’d argue for that first suggestion: 8-Bit NYC simplifies urban form beyond the point of useful infrastructure analysis.

But perhaps there’s another utility to the map, more in line with Brett Camper’s intentions for the project. When 8-Bit users click the “why? how” tab, which is always visible in the bottom left, the map serves up his project statement. He calls 8-Bit NYC “an attempt to make the city feel foreign yet familiar,” and he says, “I hope to evoke the same urge for exploration, abstract sense of scale, and perhaps most importantly unbounded excitement that many of us remember experiencing [playing video games].” By conjuring that familiar, late-’80s game-map aesthetic, Camper’s 8-Bit NYC evokes a happy nostalgia and encourages users to reconsider their own place in the map. 8-Bit NYC mimics the precise form of simplified maps employed in early adventure games like Legends of Zelda or Final Fantasy, pictured below, whose use value informs our reception of 8-Bit NYC, allowing users to reconsider their agency as New Yorkers in a space that under information-dense mapping systems might seem “un-conquerable.” Looking at 8-Bit NYC reframes my recent trip to the Apple Store in Soho not as a negotiation of transit lines (thanks in part to 8-Bit’s creative regression of New York infrastructure), but as a hero’s quest. Interestingly, the language of visual user scenarios (characters, actions, props, scenery) and adventure-game role playing is identical.

One criticism, though, is that while Camper successfully imitates the retro model, he does not adapt or evolve it. Contemporary digital map users are used to their maps computing directions, for example, but 8-Bit NYC doesn’t allow it. Or imagine, perhaps, better incorporation of city elements besides green space and streets, such as the ability to zoom below the surface map into a subway space, where train lines are rendered as pipes, Super Mario-style. Or some 8-bit renderings of prominent buildings.

The joy of 8-Bit NYC is both in refiguring a familiar space and refiguring the user’s sense of themselves in that space. The conceptual/theoretical value in the map is its foregrounding of the governing signs and codes that constrain, direct and construct meaning, according to Denis Wood and John Fels (14). 8-Bit NYC’s aesthetic choices align map users to the perspective of the adventurer, as codified by role playing games that established 8-Bit’s tessellated style. By becoming aware of their changed perception—feeling nostalgia or empowerment or instinctually fearful of their big brother stealing the controller—users of 8-Bit NYC may be more likely to consider and confront the signs and codes that make arguments in other, less apparently constructed maps.

My application of the map explicitly applies 8-Bit NYC’s implied heroic quest to its basemap. Perhaps to Alison Sant’s dismay, 8-Bit’s lo-fi orthogonal geometry makes a great canvas on which to affix a narrative. With a few additions, 8-Bit NYC can make for a provocative tool in telling a story, combining the similar nostalgia of antique illustrated maps and video games’ linear progression. Draw a path from Manhattan through Brooklyn Heights, where I’ve added a few 8-bit skyscrapers, and toward Atlantic Yards, and we can see a simple movement of vertical development starting in the city, crossing into Brooklyn and creeping toward its center. Using hallmarks of video game good and evil, we can illustrate the use of eminent domain in Atlantic Yards as a monstrous bulldozer, plowing down Snoopy and his house. Not the most nuanced argument, but there are certainly circumstances where such reductions could be useful.

Denis Wood and John Fels, Excerpts from “The Nature of Maps” In The Natures of Maps: Cartographic Constructions of the Natural World (Chicago: University of Chicago Press, 2008): 6-16