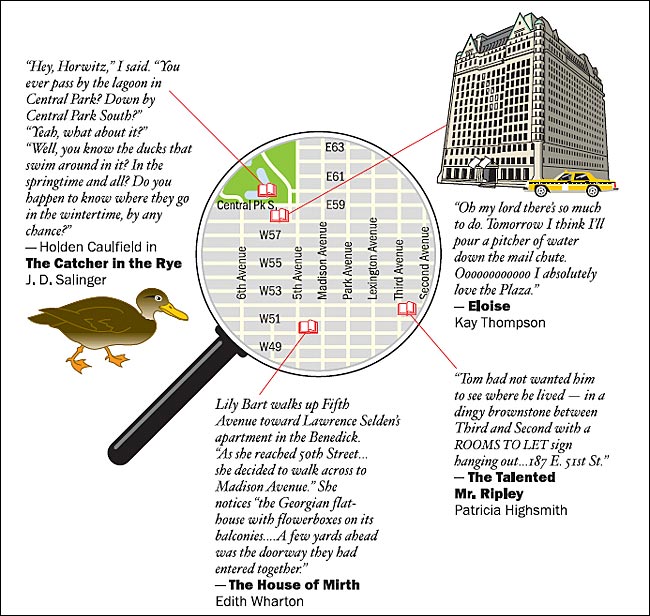 A Literary Map of Manhattan is a thematic map created in 2005 for the The New York Times Book Review that plots “where imaginary New Yorkers lived, worked, played, drank, walked, and looked at ducks.” Imaginary here means fictional characters from a wide swath of literature set in New York City ranging from stories by Washington Irving to The Catcher in the Rye to The Nanny Diaries. Times writer Randy Cohen turned the project into a collaborative effort by inviting readers to submit locations from their favorite poems, short stories, and novels from any era or genre. After vetting those submissions, he worked with graphic artist Nigel Holmes to design the map. A comment that reader Cecilia Hartman sent in sums up the purpose behind this map rather well; she wrote, “I am obviously not the only one who walks around town with a world of fictional locations imprinted on top of the so-called real geography of the city” (Cohen 2005). Plotting this world of fictional locations on a map offers an alternative, culturally rich way of navigating Manhattan that is nonetheless grounded in the reality of the city’s streets.

The map’s clean and simple design both facilitates and limits the user’s ability to engage with the substance of it. Although the lack of clutter is visually appealing, I wanted to see more details such as those mentioned in Harvard’s “Elements of Cartographic Style.” The base map does not include any labels beyond the city’s avenues and some of the streets and parks. More abeled key elements like those in Google Maps or Open Street Maps would help the user view the plotted locations in the context of their surrounding neighborhoods. Harvard’s GIS Manual also suggests that map makers “try not to hide important information in arbitrarily broad categories” and that readers should not have to keep track of more than five different classes of the thematic data. Groupings of the literary sources into a few visually distinct categories (i.e different colors) could keep the user from getting lost in the island of ninety-nine red “bookmarks.”

Three attributes that James Corner mentions in “The Agency of Mapping” stood out as I explored this map: frame, orientation, and scale (229). The framing only allows the viewer to see one section of the city at a time, sliding up or down to see a different area. It is impossible to zoom in for detail or out for a more holistic view. The map is automatically oriented to the northernmost point in Manhattan. With point 1 located at Spuyten Duyvil Creek in Inwood and point 99 at the Staten Island Ferry terminal at the southern tip of the city, it appears that Cohen and Holmes made a conscious choice to cover the geography of Manhattan from top to bottom. While I appreciated that, I still wanted more freedom in navigation. The index of entries is similarly inflexible as it does not offer any alternative ways to access different points on the map. In absence of  grouping certain locations into categories, it would be helpful if  “author” or “title” fields of the index were sortable and searchable, or if the index included additional columns such as genre or year of publication.

The “stuff of the map” pops up when you click on a numbered point or its corresponding entry in the index. These boxes contain: the address, intersection, or landmark at that location; the passage from the piece of literature that mentions the location; the title and author of the work; the name of the person who submitted the entry; a related image; and, where available, a link to the New York Times’ review of the work. The excerpted passages succeed in serving the dual purpose of providing evidence of the fictional character’s location at that point and of momentarily drawing the viewer into that particular literary world. However, I think that the map viewing experience could have been enhanced with audio clips of the person who submitted the location reading the quote. The images for each location were the most disappointing element of the map for me, most of which are photos of the author or clip-art style illustrations. For a map made on the basis of readers strong sense of place with certain fictional characters, including photos of the real place would add value to the user’s experience of the map and add another dimension beyond the words of the quoted passages. That said, I think the map is ultimately successful in its purpose of fusing fictional worlds of literary characters with the actual geography of the city. 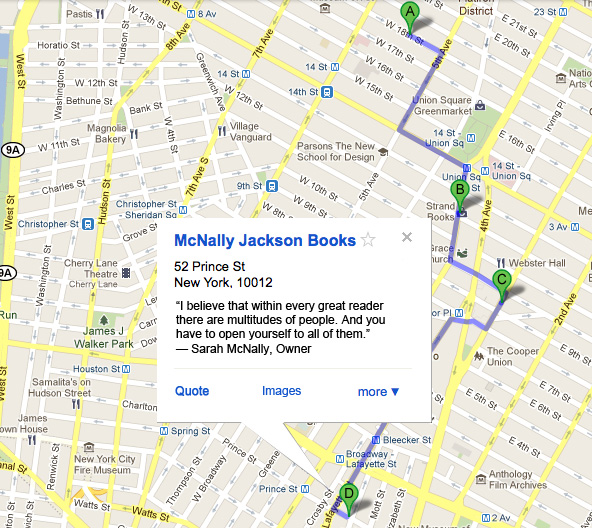 For my application of this map, I would carry over the emphasis on reader’s personal connections to specific literary places. Instead of a quoted passage from a fictional quote, I would include quotes from people such as owners, staff, and customers who have a personal connection to the store. Although my project won’t have as many points as the Times’ literary map, I think a great feature would be if users could draw their own paths between bookstores to create a personalized walking tour of sorts. Users being able to view the tour in a mobile app and engage with the content on site would further emphasize the importance of personal connection to bookstores as community places. A final lesson that we can apply to our own projects on URT comes not from the Literary Map itself but from Randy Cohen’s accompanying article in which he wrote, “Mapmaking is a process of omission — if it were not, a map of the United States would be 3,000 miles wide” (2005).