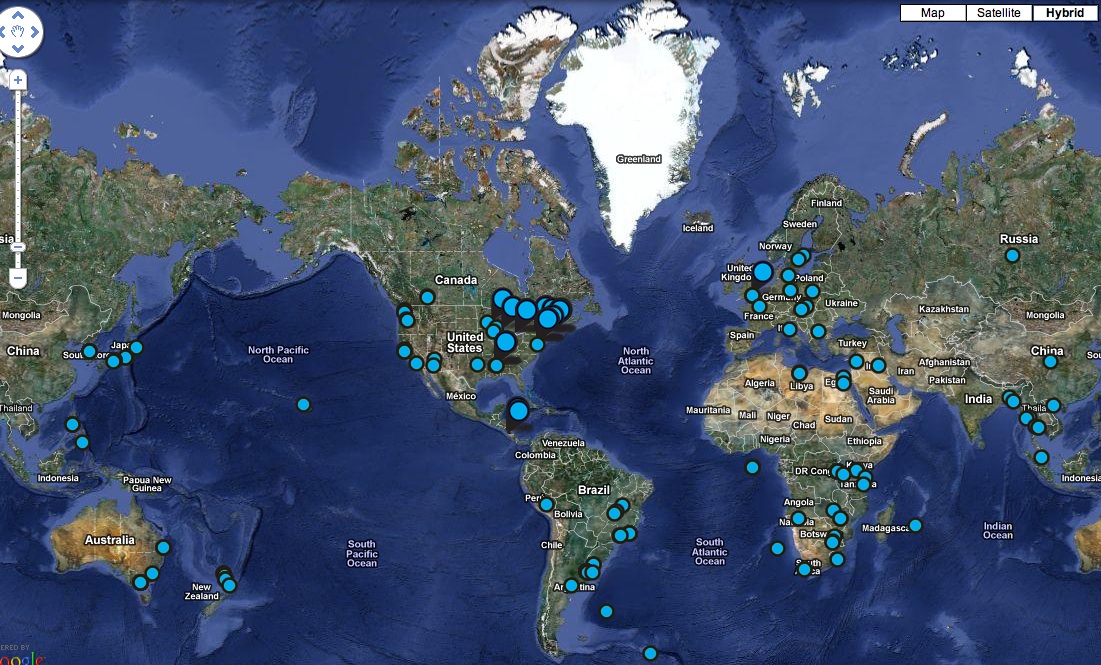 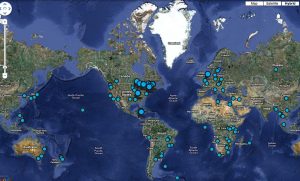 Broadcastr is a mapping program that strives to contextualize our surroundings through oral histories.  Users are able to upload stories to the site and pinpoint them to a specific location on the map.  Other users who select that location are then invited to hear stories and anecdotes related to the area contributed.  The data that is collected serves as a primary document for that location allowing participants to learn and share through other people’s experiences.  The map becomes less about the literal space and more about what that space represents for the people who experience it.

Broadcastr’s intention is to create an environment where history can be shared collaboratively. Users produce the data, and it is the foundational elements that surround the map that allow it to be constructed. In doing so they have created what Denis Wood and John Fels would possibly consider a Paramap. With a Google maps as its base,  users are encouraged to pick a specific location by pointing to it on the map or typing in the specific address.   Once a location has been selected the user can record a testimonial or story.  They also have the option of listening to the work of another participant.  Each story can be filtered by author, theme as well as location, allowing users to share and connect through common interests as well as geospecically. While Broadcastr’s main goal is to have primarily user generated content, they have added data from various historical, literary and cultural organizations as well.  By clicking the featured tab, which is prominently displayed, users are given the opportunity to listen to content sponsored by one of these organizations or presented by a prominent figure.   The only thing we physically see on the map or the geopionts created, but the data created links back to all of the other elements on the site.   All features that are found on the website can also be accessed via iphone and Android apps, affirming Broadcastr’s commitment to making it accessible as possible at all times.

On first glance, this site is great.  It allows people to document experiences in a new way; promoting a new sense of scholarship and community.  Too often there is an emphasis on letting information and media wash over you without participating in a constructive way (McPherson, 120).  The interface is easy and direct giving options to the user.  This welcomes anyone and everyone with a computer, or a smart phone to digitize a moment in history that is important to them and link it to a specific location allowing not only the story to be contextualized, but also gives dimension to the location allowing it to actually be a “lived space” rather than simply a point on a map (Corner, 213).  The program is ideally intended to be used while one is walking around the specific area they are listening to.  This places the user directly in the geospacial context that they are listening to rather than being removed from it physically as well as historically. The map allows users to navigate anywhere they want to allowing markers to be dropped anywhere in the world conceivably stretching global boundaries and notions of urbanization (Corner, 227).   All of these concepts are great in theory, but the fact that there are not many users is a detriment to the the project right now. Like many other content based sites, users are able to sort through content based on its ratings and the number of views it has had.  In doing a couple searches for topic that would benefit from a site like this, like Occupy Wall Street, I found only five posts none of which had over five views.  One of the sponsored sites from the 9/11 Memorial, has a good number of entries that have a solid amount of views, but still not as many as one would expect.  In acting as a platform primarily for their sponsors, the map does not allow us to re-imagine or reshape our surroundings as seamlessly as expected. Instead we see groups of people that have been categorized as having something in common speaking on that topic.  What was so exiting about the project initially was this idea that it could be anyone from anywhere speaking about a specific location, and that would be what bonded them and reshape the collective space that was shared. In its current form it seems more like a platform for various organizations with a few random people sprinkled in for good measure.

Visually speaking, the structure of the interface changes once we press play. The user is almost removed from the spacial component of the dataset. When a story is selected a window pops up with a small screen shot of the point, but no geospacial information is given about where specifically that it. The map we were once looking at has now been covered up by an interface similar to that of a youtube page. While the emphasis should still be on the auditory experience it might be interesting to have the option of linking to perhaps peer submitted photos to create a more cohesive sense of involvement.

It has been intereting thinking about this project in relation to my own project.  Broadcastr has created a set of circomstances whereby anyone with the proper technology has the ability to contribute to the historical narrative of the city and or the world.  Their intention seems to be to step back and let the people form what is created and how it should be presented.  What if they were to intervene a bit more?  Not in terms of content or presentation, but in the manner in which it is presented.  I would add a set of fields that would help people find commonality among their stories.  Years, age,  an additional element that emphasized the location and like I mentioned before perhaps some visual component to help ground the experience.  In doing so, I think the site could become more than just an experiential map.  The possibility of tracking the data could lead to investigations on location and memory among other things.

Broadcastr is still pretty young and it makes no qualms about still working out the kinks.  In creating a nonlinear format for mapping and sharing oral histories we see the potential in a project like this. I hope it developes in a way that allows  people to be open and learn from each other and their experiences.

Denis Wood and John Fels, Excerpts from “The Nature of Maps” In The Natures of Maps: Cartographic Constructions of the Natural World (Chicago: University of Chicago Press, 2008): 6-16. [the pdf includes additional pages, but you need only read to p. 16]