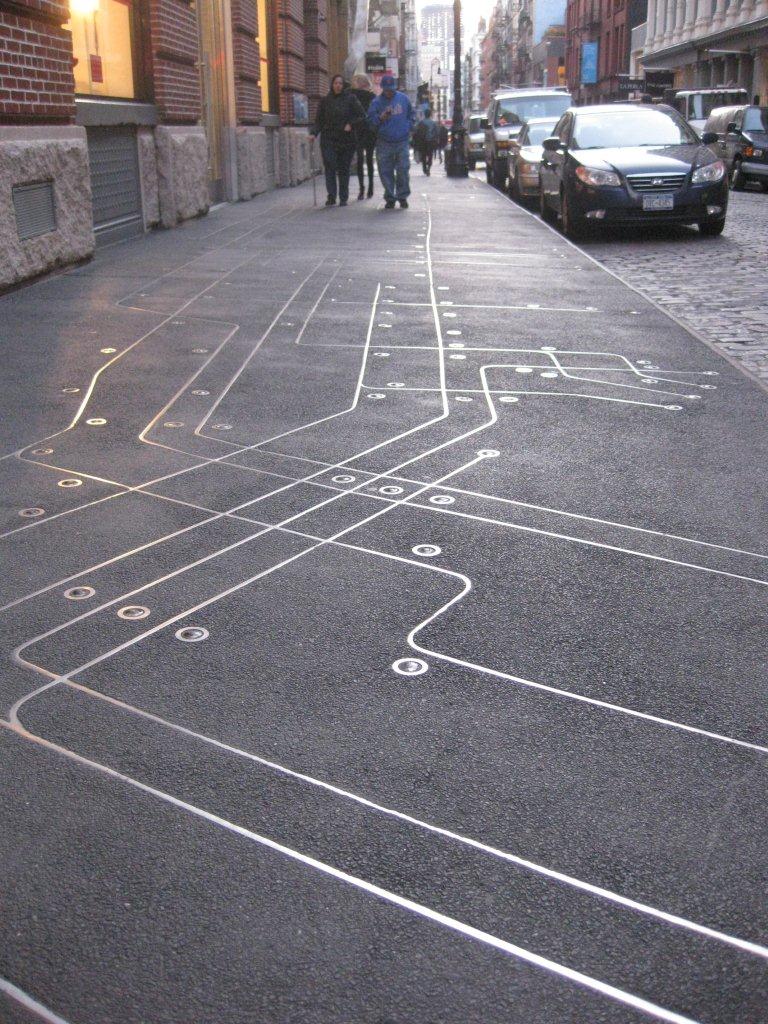 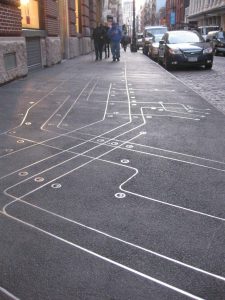 Françoise Schein is a Belgian architect, town planner, academic and artist. According to her website (www.francoiseschein.com) “she specializes in cross-discipline projects that highlight the relationships between urban planning, art, ethics and citizenship”. She is also the founder of INSCRIRE a non-profit organization which “works with local populations in communities throughout the European Union and the world to conceive and create artistic works and events which highlight human rights principles and cultural diversity ” Schein herself has lived and worked all over the world and her art encompasses her interests in cartography, transport systems, public spaces, urban regeneration and human rights.

The origin of the “human rights in the subways” project was her first urban map entitled Subway Map Floating on a NY Sidewalk completed in 1985. The relationship between underground trains and the rights of man is explained on the INSCRIRE website: “For her [Schein], the subway appeared to be the most democratic place into which engrave philosophical concepts to address to the people”. Subway Map was awarded the New York City Design Commission’s Award for Excellence in Design, although the project is rather ungraciously listed under street furniture on the Commission’s website.

The map is located outside 110 Greene Street in New York’s SoHo neighborhood and was commissioned by the building’s owner Tony Goldman. It is approximately ninety feet long and twelve feet wide filling the entire sidewalk. However, despite its size, only Manhattan is represented. Schein explained that “I couldn’t fit Brooklyn or Queens on the sidewalk” thus privileging Manhattan’s conveniently compact rectangular shape. Curiously, although Greene Street runs from southwest to northeast, the map is oriented with the southern section towards the north.

The schematic of the subway lines is constructed of 1/2 inch stainless steel bars set into a “washed terrazzo floor” with 156 “landmark glass rounds” with L.E.D lights marking the stops. The glass disks were found in the cellars underneath SoHo’s sidewalks. The schema itself is an amalgam of old (IRT, IND and BMT) and new maps combined to fit the space. Probably the only person to ever actually use the map to navigate the city’s transport system was Schein herself who used to carry models of the project with her to the various New York planning agencies including the City Art Commission, the Landmarks Commission, the Transportation Department and Community Board 2. The final installation is perhaps as much a monument to Ms. Schein’s tenacity as to her artistry. 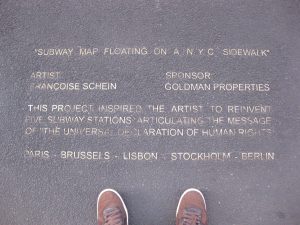 In terms of this class’s evaluation rubric this particular map fails virtually every criterion listed although it does have a title and name/affiliation. However, if we were to ask of this map “Does it contribute to urban regeneration? Is it a work of art? Is it fun to interact with? Can you stand on it?” the answers would be “yes” while other maps would be found sadly lacking. Does the map serve its intended purpose? As art historian and academic Patricia Phillips says in reference to similar works by Schein, “While I suspect that none of these projects make any particular city more decipherable, they constitute systems of mapping that delineate cities rendered invisible by virtue of their complexity.” Thus with Subway Map Schein is “re-creating on a diminished scale a plan that can never be seen. This project locates a particular place within the geography of a vast region while concretizing the codes that form and impart information”. Phillips argues that Schein addresses our sense of alienation arising from the disjunction between the explosion in scale of modern cities and the miniaturization of the information systems which operate them. “Her process is disturbingly literal and richly metaphorical: she reproduces at various scales the circuits on which our cities are structured, visual equations of the micro-processor and the urban map.”

I took the opportunity to observe how people walking along the sidewalk actually “used” the map. The main user profile rapidly became were clear for, while most busy New Yorkers rushed by without even noticing what was embedded beneath their feet, children, teenagers and tourists were fascinated, curious to know what the installation was and what, if anything,  it represented. While they were walking over the map they were no longer admiring SoHo’s architecture or locating the next shopping opportunity but looking at the ground and engaging with the city at a different level both literally and metaphorically. People experience this map physically even altering their way of walking; some deliberately choosing to walk along the lines while others avoided stepping on the steel bars like the children’s game of jumping over the cracks in the pavement for fear of being eaten by bears. 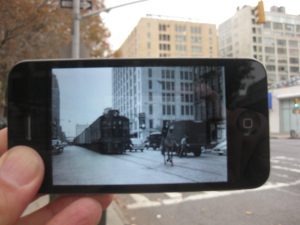 As to the application of this map to my own project in many ways Subway Map Floating on a NY Sidewalk recalls walking tours of the last century where visitors were given a map to navigate a city’s sights guided by a line painted on the sidewalk or metal markers inset into the pavement. In the digital age PDAs are ubiquitous and I therefore envisage users employing their smart phones to access the URT in order to navigate the former route of the New York Central Rail Road and the High Line along 10th and 11th Avenues and their environs. By accessing historic archive photographs directly on their phones users will be able to create their own instant “Dear Photograph” and so understand how the urban environment has changed over time.

Francoise Schein’s map was suggested to me the book Mapping New York by Seth Robbins and Robert Neuwirth. This beautifully illustrated book, together with its companion volume Mapping America, contains a fascinating collection of historic, cultural and artistic maps.