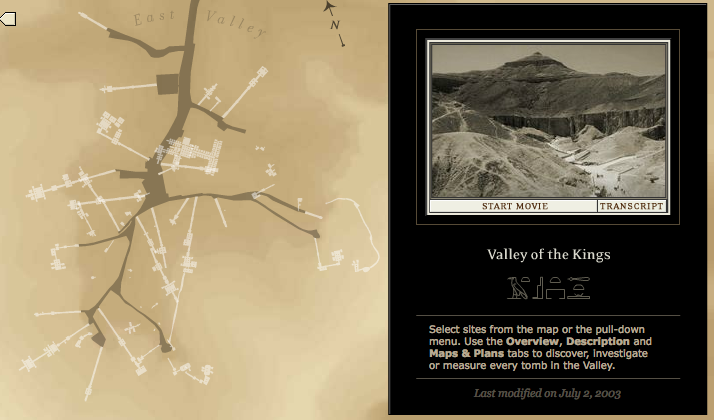 The Theban Mapping Project (TMP)  is based at the American University in Cairo and has been “working to prepare a comprehensive archeological database of Thebes” since its inception in 1978 (Thebanmappingproject.com). The creators of TMP, Dr. Kent and Susan Weeks, after a vacation to Egypt realized the need and importance of comprehensive documentation of the historic region. The Weeks knew what a finite resource the multiple monuments, tombs and temples and “believed that the first and most essential step in preserving the heritage is a detailed map and database of every archeological, geographical and ethnographic feature in Thebes,” (Thebanmappingproject.com). During the last decade the TMP staff decided to focus the majority of their research on what is known as The Valley of the Kings region, which is the atlas I chose to critique.

When I first launched The Valley of the Kings atlas, I was immediately impressed with the interactive technology that was apparent from the first click, as well as the amount of information compiled. This database alone has a compilation of nearly 2000 images. 250 detailed tomb and monument maps, 65 narrated tours by Dr. Weeks, and a 3-d interactive tour of the K-14 tomb. A feature the TMP is currently adding to more tombs in the next five years.

Looking at the regional home page map, I feel it included almost all of the elements needed to create a successful thematic map listed in the Harvard GSD “Elements of Cartographic Style” article. The contextual framework was clear from the very first page of the TMP website explaining the project, and continued to be clear throughout the chosen atlas. The labels and readings throughout the numerous layers and entities were user friendly and easy to understand even when I was reading about foreign and historic facts and locations. The information was laid out effectively and it was easy to find almost any data through the tabs and links provided, because of the cohesiveness throughout the interactive pages, (Harvard GSD). 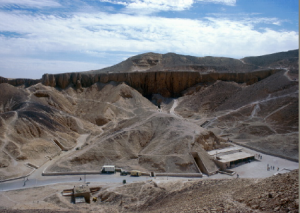 I have only two main critiques of The Valley of the Kings atlas. The first involves the mapping and description of actual historic dates involved with the construction of the tomb selected. Many of the transcribes and audio accompaniment included facts on a certain dynasty or royal member involved with the tomb creation, but there was a lack of numerical date data when these dynasty eras took place. I had to find these dates on the host website, and each time it took me a fair amount of time to locate the data.

My other critique involves the general landscape functionality of the geographic home page map. In James Corner’s The Agency of Mapping he states “plotting entails the ‘drawing out’ of new and latent relationships that can be seen amongst the various extracts within the field,” (Corner pg. 230) as an intricate part of a successful mapping framework. While the TMP atlas provides a strong plotting relationship throughout the Valley of the Kings region, it lacks this type of relationship when comparing the region to external parts of Egypt. Besides the initial launch of the atlas I could not scroll out to see the region’s placement in Egypt. Because I am not completely familiar with the country’s geographic features I would have found this option useful to form an even better landscape user understanding.

In regards of using the TMP atlas as a prototype for my Made In New York: A Historical Survey of Woody Allen and other Legendary Film Locations, there are many interactive strategies and layering formats I also want to use when structuring my research. Even though the Valley of the Kings Atlas and my film location map could not be more geographically different, both will focus on historic information through diverse landmarks of a certain region. Again, the amount of research and solid information in the TMP map I chose to critique was staggering, but the team at the American University did an excellent job in setting up the multiple information layers in a concise and navigable way that was user friendly regardless of how much prior knowledge you had about the historic region selected.

I also was so impressed with the multiple techniques used to express the information that TMP clearly had to spend a significant amount of time on. This is something I really hope to accomplish with my historical survey, because I feel it the most significant aspect of any mapping project that will make users not only enjoy the viewing experience but also interact with the project and become more informed.

In conclusions, besides a few small critiques, I was really impressed with the Valley of the King Interactive Atlas as well as the overall Theban Mapping Project. Because of the multimodal aspect throughout the atlas and the amazing amount of information provided, I feel that during my short time investigating the project I have already formed a much better knowledge regarding the Thebes region and the significance for the documentation of The Valley of the Kings monuments. The Weeks made it appoint over 30 years ago to provide users with the most comprehensive spatial data of a historic region they fell in love with on a spontaneous vacation, and in my opinion they absolutely succeeded. The Theban Mapping Project has some of the most well-done and inventive media maps I have witnessed yet, and it was clear how much passion the creators had and still have for the documentation and preservation of the Egyptian region.