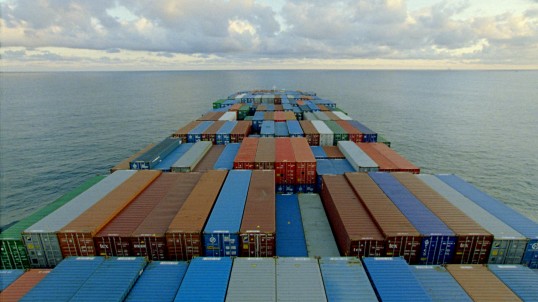 The Forgotten Space.
A Film by Allan Sekula
and Noël Burch 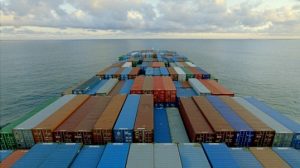 The Aperture Foundation, the Vera List Center for Art and Politics and the Photography Program at Parsons The New School for Design present a special screening of The Forgotten Space, a film by Allan Sekula and Noël Burch, followed by a conversation with Sekula.

The Forgotten Space follows container cargo aboard ships, barges, trains and trucks, listening to workers, engineers, planners, politicians, and those marginalized by the global transport system. We visit displaced farmers and villagers in Holland and Belgium, underpaid truck drivers in Los Angeles, seafarers aboard mega-ships shuttling between Asia and Europe, and factory workers in China, whose low wages are the fragile key to the whole puzzle. In Bilbao, we discover the most sophisticated expression of the belief that the maritime economy, and the sea itself, are somehow obsolete.

A range of materials is used: descriptive documentary, interviews, archive stills and footage, clips from old movies. The result is an essayistic, visual documentary about one of the most important processes that affects us today. The Forgotten Space is based on Sekula’s book Fish Story (1995), and seeks to understand and describe the contemporary maritime world in relation to the complex symbolic legacy of the sea.

Born in 1951, Allan Sekula has produced work with photographic sequences, written texts, slide shows and sound recordings that has traveled a path close to cinema, sometimes referring to specific films since the early 1970s. However, with the exception of a few video works from the early 70s and early 80s, he has stayed away from the moving image. This changed in 2001, with the first work that Sekula was willing to call a film, Tsukiji, a “city symphony” set in Tokyo’s giant fish market.

Sekula’s books include Photography Against The Grain (1984), Dismal Science (1999), Performance Under Working Conditions (2003), Titanic’s Wake (2003), and Polonia and Other Fables (2009). These works range from the theory and history of photography to studies of family life in the grip of the military industrial complex.

Born in 1932 in San Francisco, California, Noël Burch has been living in France since 1951. He graduated from the Institut des hautes études cinématographiques in 1954. While primarily known for his theoretical writings, he has always positioned himself as a filmmaker and has directed over twenty titles, mostly documentaries.

Burch has been publishing since the 1960s. Among his numerous publications are his first and best known book Theory of Film Practice (New York: Praeger, 1973) and To the Distant Observer: Form and Meaning in Japanese Cinema (Berkeley, 1979), which remains the most robust history of Japanese cinema written by a Westerner.

From 1967 to 1972, he collaborated with Janine Bazin and André S. Labarthe for the celebrated series Cinéastes de notre temps, and directed seven programs which are considered to have renewed the “film-maker portrait” in the heroic years of French public television. It was during that same period that Burch was co-founder and director of the Institut de formation cinématographique, an alternative film school associating theory and practice.