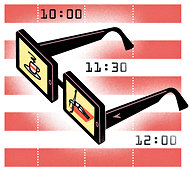 Just read this in the Sunday New York Times Metropolitan section, thought these may be relevant for a few projects.  The last time I tried to post an article the link didn’t quite work so I pasted it here if anyone is interested.

Apple’s App Store has hundreds of entries for travel apps on New York. Even after you have sorted through the ones that are good for nothing — and that is most of them — the selection is overwhelming. A good idea for choosing a tour guide app, then, is to decide what you are hoping to be guided to. Here are a few to consider.

HIPSTERS Urbandig is a collection of tours of the city, each one created by a presumed expert and claiming to take you “off the beaten path.” In general, Urbandig’s path leads to Brooklyn clothing boutiques and what it calls “meticulously crafted” cocktails in the East Village (it also offers tours of several other large cities). The guides are meant to be quirky, as evidenced by one called Frisky Business, a collection of recommendations of public bathrooms, written for people who find such spaces romantic.

These are not coherent tours, unless you are the type of person who plans on eating nachos at five different places in a single day. Because they are written by different people, each one has its own style. For the most part, each guide consists of a few related places, with a few words on each one. If you like experimental macaroni and cheese and Bukowski-themed bars in Williamsburg, this is your app.

HISTORY There are many ways to approach history apps, and App City has written about them more than once already. Rama offers the simplest approach: a series of walking tours, each one a stroll through a historically significant area, with pins along the way adding commentary.

Most of the tours focus on what is probably the most popular era of New York’s history, its buildup in the immigration booms of the late 1800s and early 1900s. Each entry consists of an informative written description (no voiceovers), along with an attractive historic photograph. The entry on Hammerstein’s Olympia Theater does not quite conjure up the opulent structure that once stood on the site of what is now the Best Buy Theater. But the stunning images of its interior and exterior help.

The app consists of eight guides. Three — of the Brooklyn Bridge, Chinatown and Union Square — are free. The others, which cost either 99 cents or $1.99, are not significantly different from the free ones. The app also includes dozens of tours of other exotic places, like Indonesia and Detroit.

TRANQUILLITY Peace and quiet are not New York’s strongest suits. But Peaceful Places New York City, an app adapted from a book by the same name, identifies more than 100 locations and activities for those looking to escape the grind.

The app’s very appearance is calming, with its pale olive background and simple interface. There are, of course, many hiking and bird-watching suggestions, an impressive guide to quiet dining, and a good list of bookstores.

Each entry includes a Peacefulness Rating of one to three stars. A three-star rating indicates that a place is consistently serene. For the one-star entries, the app dictates when they should be visited for maximum tranquillity. This is particularly useful with the night life and dining suggestions. Many popular rooftop bars can be peaceful, it turns out. Just put on your coat, and go when it’s cold.

Have a favorite New York City app? Send tips via e-mail to appcity@nytimes.com or via Twitter to @joshuabrustein.