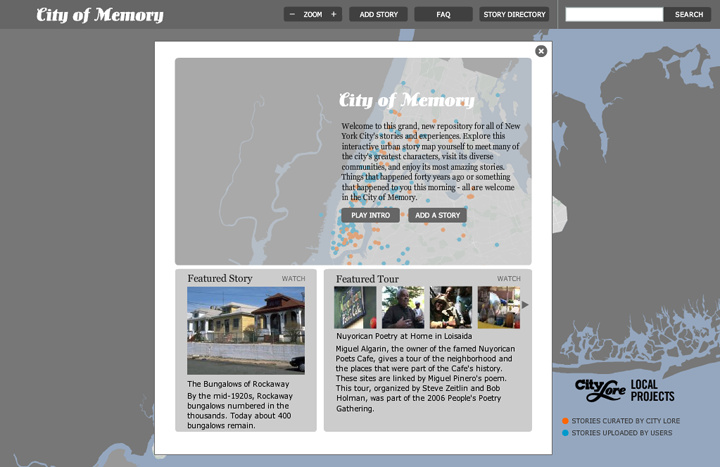 When first visiting City of Memory, the viewer is greeted by a glimpse of a base map that is very quickly covered by an overlay of welcoming details.  “Welcome to this grand new repository for all of New York City’s stories and experiences”, is the ambitious message that we first read.  And, indeed, what appears to be the goal behind this map is a wonderfully ambitious one.  But when evaluating it within our various criteria, I believe the application falls a bit short.

James Corner, in “The Agency of Mapping: Speculation, Critique and Invention”, says that in mapping, “the capacity to reformulate what already exists is an important step.”  In the case of an interactive and multimodal map, I think this notion of reformulation, of expanding ideas into re-imagined spaces, is ever more important.  Corner also says that within maps we can “discover new worlds within past and present ones. . . inaugurate new grounds upon the hidden traces of a living context” (214).

The City of Memory attempts to map stories, memories, imprecise recollections, tales of neighborhoods, and more.  Some stories are curated, while some stories have been submitted by website visitors.  There are video clips, images, and text-based stories.  Some points on the map have been linked together as a sort of “walking” tour around topics such as “Indo-Carribean” or “I am New York City…”, although there isn’t a clear logic behind their organization.

While each story is pinned to a location on the map, the map doesn’t lend itself to a “discovery of new worlds” or an “inauguration of new grounds.”  It is more of an afterthought, or a nifty tool to navigate through web content, with little attention paid to the spatial value it could bring to the presentation of memories.

Examining the “perimap” elements that Denis Wood and John Fels discuss in their book, The Nature of Maps, it’s clear that the City of Memory takes a very minimalist approach.  The legend is simple, only identifying two types of points for curated or user-submitted content.  There are just three levels for zooming (wide, medium, close), and there are no filters for time or other content features.  There are a few other standard cartographic elements present, including title, institutional affiliation, project funders, and labeled key elements.  I find some elements of the graphical hierarchy to work well, primarily the bright and bold colors contrasted against a grey background.  But the base map, when zoomed in, fails to expand at all to include additional labels or references in relationship to the space.

Minimalism, within reason, isn’t necessarily a terrible feature.  While the authors Vidya Setlur, Cynthia Kuo and Peter Mikelsons write specifically about evaluating maps in a mobile interface, there is still value in their minimalist approach for online, multimodal maps.  The computer screen may offer more landscape than a smartphone, but the variety of media content to potentially map can very quickly clutter a screen.  They write that a good interface should minimize the amount of visual clutter, and yet assist the viewers in finding the information they need.  There should be high contrast between relevant information and other information (Setlur 1). 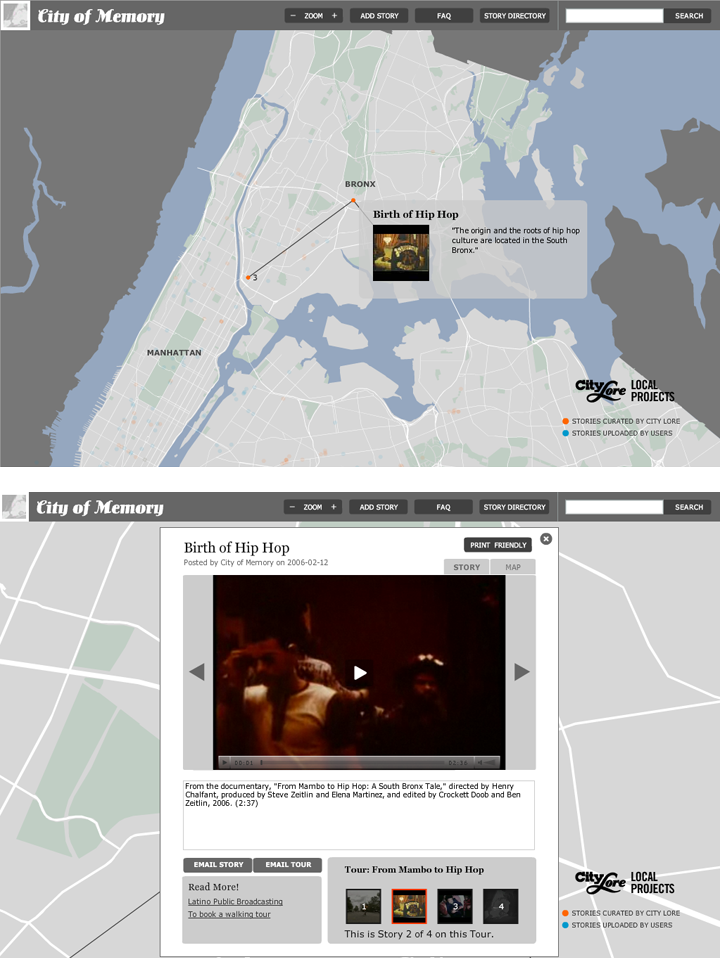 At least City of Memory has high contrast, but detail to orient a viewer within the space and assist us in finding information has been stripped away completely.  Very few road lines exist, and none of them are labeled.  The wide view is really the best place to understand location, but the points on the map are minuscule and crowded.  Hovering over a point creates a mouse-over effect and a small preview window pops up with a title, short amount of secondary information, and an image.  This is a nice feature, but when you click on the dot to view more detail, you are quickly zoomed into a plain, reference-less map.  And then before you can attempt to orient where the map has zoomed, it is covered up completely by the story box.  The story box itself is crowded, with just a small window for viewing video, and an even smaller space to read the accompanying text with an easy-to-miss scroll bar.

The details within the “epimap” also fall short, in my mind, as there is little information about the project beyond what you see on the welcome screen.  The FAQ section reveals little about the work that went into curating the content, how it has been curated, and why (so far, Wikipedia has been my only link to a bit more detail).  The Story Directory page takes you away from the map altogether, and into a laundry list of text that you cannot easily scan or filter.

In all, I feel City of Memory disconnects too much from the physical city landscape that has given birth to these memories.  Within the stories, we are offered wonderful details of the city.  But by stripping away the map, we lose the canvas that links all of these memories together.  This is an important thought for my mapping project, and something that I feel must be more prominent in my application.  Even if the memories are imprecise, or some of the detail is lacking, the stories and memories of subway graffiti depend upon the physical space.  It certainly shouldn’t be covered up when exploring videos, photos and texts.  The location of the lines, the train yards, the lay-up where trains were held overnight are all key elements to discovering a new understanding of graffiti within the context it was created in.  And if I had the technical ability to animate a mapped journey through a subway line — for example, following a train from a layup in the Bronx to a station in Brooklyn — this would be my ideal way to appreciate space, time, and memories together.

Wood, Denis and Fels, John, Excerpts from “The Nature of Maps” In The Natures of Maps: Cartographic Constructions of the Natural World (Chicago: University of Chicago Press, 2008): 6-16.