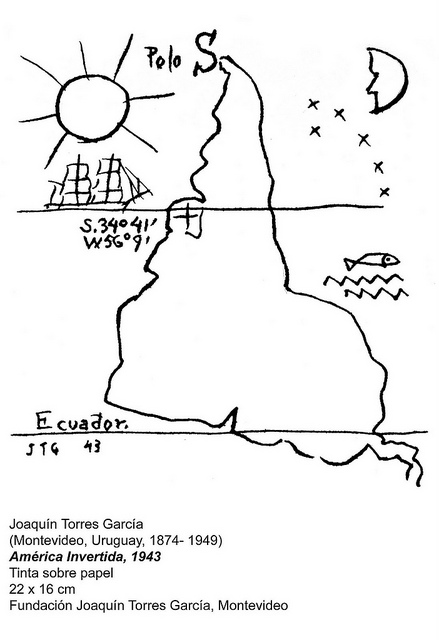 After reading James Corner’s text, The Agency of Mapping: Speculation, Critique and Invention, I remembered an emblematic artwork of Latin American 20th Century art history: América Invertida (Inverted Map of South America) (1943) by Uruguayan artist Joaquín Torres García (1874-1949). I found this piece very interesting to see, in light of Corner’s remarks, how some artists have been conscious of the essentially fictional status of maps and the power they possess for construing and constructing worlds.

Inverted Map of South America, often called the Upside-down Map, is an ink-on paper drawing that places the south of the continent in the north. It is full of symbolism with a fish, the moon, the sun and a sailing ship. The equatorial line is shown below the latitude line for Montevideo, located at 34∘41’ south, 56∘9’ west. The South Pole is marked at the top of the drawing.  All of these symbols are meaningful and recur in Torres García’s other works. For example, interpreters regard the fish as a symbol of life and fecundity, and as Torres García said, it represents the physical and formal universe.

Torres García, artist and art theorist, is also known as the founder of constructive universalism. He was born in Montevideo, Uruguay, and early immigrated to Barcelona where he attended art school and began his artistic career. Then he moved to Paris, and later Madrid and other European cities. In 1934, however, he returned to Montevideo. Briefly, constructive universalism was an artistic proposal, a way of seeing, making and experiencing art, a synthesis which Torres García carried out by combining his personal experiences with those of the European vanguard at the beginning of the 20th Century, and with his vision of art from all ages, particularly from South America.

After going back to Montevideo in 1935, Torres García published “The School of the South”, which is considered his first Latin Americanist manifesto. In it, he formulated the premise that would make it possible to establish an autonomous art movement in Latin America. For many critics and scholars, this manifesto was the first systematic attempt to put together an autonomous artistic tradition for Latin America. Torres García was proposing that Native America was the point of origin for a new hemispheric visual-arts tradition founded on the recovery of the pre-Hispanic past and its reconciliation with universalist art.

Even before drawing Inverted Map of South America, Torres García had already stated in “The School of the South” manifesto that:

“I have called this “The School of the South” because in reality, our north is the south. There must not be north for us, except in opposition to our south. Therefore we now turn the map upside down, and then we have a true idea of our position, and not as the rest of the world wishes. The point of America, from now on, forever, insistently points to the South, our north”.

So, what is such a map telling us? It is still possible to find a variety of interpretations and readings of this map, including the idea that the countries of Latin America feel slighted by the dominance of the developed north, and the conclusion drawn by some that Latin American art should go back to its pre-colonial origins. However, I would like to point out what I consider the main messages of Inverted Map of South America.

Guided by art critic Andrea Giunta, I believe that Torres García’s inversion of the map is a decontextualization of both the map and the idea of a Latin American art. Together, the map and the manifesto comprised an inaugural gesture establishing new parameters, which were spatial.  To me it is really interesting that using an emblematic element of contextualization –a map- the artist, at the same time, places a decontextualizing operation: the declaration of a new art that is not only Latin American but also universal. In Corner’s words, this action demonstrates the capacity to reformulate what already exists, and what already exists in the map is more than just the physical attributes of terrain.

As Corner points out, mappings are not transparent, neutral or passive devices of spatial measurement and description. They are instead extremely opaque, imaginative, operational instruments. Mappings are not representations but mental constructs, or ideas that enable and effect change.

For more than half a century, Inverted Map of South America has been iconic in Latin American culture. It is a piece that has been used to tell different stories, and the phrase, “the north is our south” is ubiquitous. The image is synonymous with a country and with a style of art, constructive universalism. When I went to Montevideo, I saw mugs, t-shirts, erasers and even post-it notes emblazoned with the image of Torres García’s inverted map.