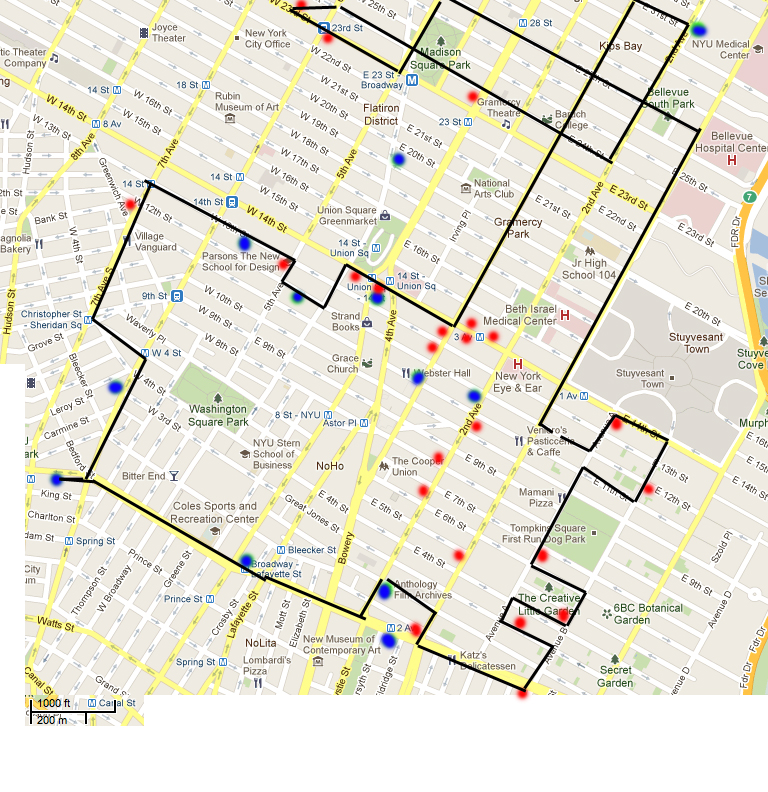 So I had a plan yesterday; go to the gym, stop by the AMC kips bay theater for some photos and see “The Desendants”, meet a friend for lunch, and take some photos for class to help get the URT process moving.  But in my years I have remembered that most plans never work out how you hope, and luckily I left my apartment ready for anything.

Upon arriving at the gym in the early morning I noticed a number of large trucks and signs posted around the corner from the entrance but paid no attention as I had a schedule to keep.  However, the door was locked with a sign in the window stating “closed for a private event”.   Apparently a movie or television show can buy out a business for the day and that business isn’t obligated to inform its members aside from a sign in the door, I checked the website when I got home.  But it was no biggie, I was in an area I needed to take a few photos of abandoned theaters so I started wandering with my camera until the 9:40 show time.  Plus, it is always fun to take a little stroll through the city when time allows it.

I got to the theater late, didn’t plan the exterior photo of the theater to be so complicated but that façade is huge, and I was crossing my fingers that I missed all the trailers and none of the movie.  Unfortunately I was greeted at the theater door by a very unsatisfied customer walking out in a mood about the film not starting yet.  No projectionist available or something of that sort, but a manager came around to explain that the problem would be fixed shortly.  Again no biggie, I had a book with me and it gave me time to use the restroom.  I returned and still nothing on the screen, thinking how complicated could it be to get someone to start the projector?  I found a seat and started reading for a few minutes, which turned into a half hour when I realized half of the audience of 20 had left in frustration.  Only then did another manager come into the theater and start handing out passes for another admission and apologized for the inconvenience.  No real word about what happened with the projector, just that three other movies were experiencing similar problems at that time and the theater wanted us to leave so they had time to fix whatever was wrong without angry customers.

Here I am at 10:20 on a Friday with a gym bag of clean clothes, a camera, and I needed to kill another hour until my lunch appointment.  I figured walk around some more and take photos of the other theaters I am missing while enjoying another stroll through the city.  I never really get to do this as I have become very jaded when walking lately as I am always in a hurry and looking for the quickest path from one block to the next.  So imagine my surprise when I actually slowed down my pace and started people watching, it got me thinking about all the things I had been missing out on.  I started taking pictures of random buildings that fascinated me, people that looked interesting (in the Bill Cunningham sense), and amusing or intriguing things happening around me.

It was strangely turning out to be a great day apart from my morning plans backfiring, so it came as no surprise when my friend called and asked to reschedule our lunch.  I thought I was set from 7 AM until 1 PM and now I have the whole afternoon to wander the city, what a concept.  Only I had a slight agenda, take photos of theaters so you have at least one image for every point on URT.  I never could have fathomed walking as much as I did by the time I got home at 1:30, and I never would have thought taking photos of the city and its inhabitants could be so stimulating.  I wanted to include a map of the area I covered just to document how much I travelled, I sort of guessed as far as my pattern when it came to direction for the sake of cluttering this all up.  I covered the whole map in about three hours minus a couple of breaks and I also got some great photos of people and locations that I thought might be of interest.  First, the gentleman in the red shirt with a flashlight hanging from his ear.  The shirt was actually an Elmo shirt, he had a beard that went to his stomach, and he was part of a handyman company doing a job in Chelsea.  Second, a police car being towed brought a smile to my face.  Never would I have thought this could occur, I am sure it was a problem with the engine or the siren was broken and it was towed so it didn’t cause any problems, but seeing a cop car being on a tow truck bed made me feel good.  Third, an interesting graffiti mural from Bowery and Houston that always seems to be changing when I pass it.

There were some other interesting photos along the way but I think these highlight the effects of strolling through the city with a camera on hand.  Maybe I should do this more often and write about it on a blog?  Who knows, but for now I have to start focusing on URT and this paper that I have due on Monday.