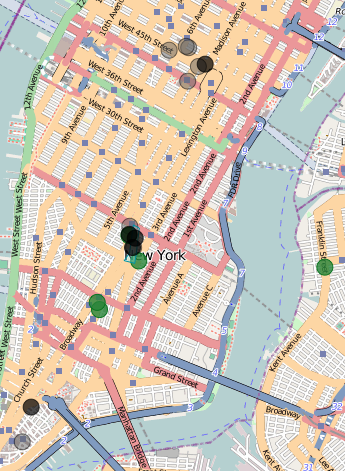 In finishing up this project, I find myself wanting to stay with this research as exploring both the past and present independent bookstores has been such a fascinating and, judging by all the news lately, a rather timely topic. Alas, I’m graduating and don’t know when I might again have the time and resources revisit the subject. The history of independent bookstores in NYC is something you could spend years investigating. In fact, from the amount of data that I know is out there that I didn’t include on URT, I think it’s entirely possible for someone to devote their entire academic career to being an Independent Bookstore scholar, if one doesn’t already exist.

Where I think my project succeeds is in making connections between the shuttered bookstores, the historical ones still around, and the new ones that have popped up in recent years. I did find that there’s a lot of prior research on the topic, although the majority of it is textual. I think that my contribution to the scholarship is significant in its presentation of the data in a spatial and multimodal format. While I am not the first to map bookstores, as you’ll see from one of my records on URT, I might be the first to plot the old and the new together.

This final stage of taking the data and actually getting it onto URT was a lot more challenging than I expected it would be, and I ended up reconfiguring my initial data model as a result. Before actually going in and starting to create the field types, I thought that I would only have one layer – bookstores. After getting the hang of how things worked on URT and what was possible in the interface, I was able to separate my data into layers that distinguish the different elements visually and use the references tags to make links between them. At the end of it all, the project does feel unfinished to me, but I suppose that is just the nature of this type of research. Even if I don’t continue with it, maybe someone else interested in independent bookstores will discover it on URT and find it useful for their own work.