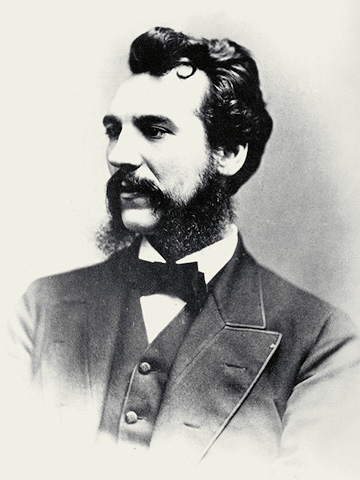 With the famous exchange between Alexander Graham Bell and his assistant, Thomas Watson in 1876, an industry came into being. The history of the Bell System (later AT&T) outlines the development of telephony itself. My map illustrates major aspects of this story, from the invention of the telephone, to the consolidation of the Bell System, to the crucial innovations that came out of that system, ending in 1984 when the Bell System was broken up.

Perhaps the biggest surprise is that such far-reaching innovations as the transistor and the laser were developed by one of history’s most gigantic monopolies. The four buildings shown on the map represent the central elements of the Bell System: control (AT&T Headquarters), connection (AT&T Long Lines), innovation (Bell Labs) and manufacturing (Western Electric). They are intimately bound-up with the narrative of both the company and the development of modern communications. The degree to which telephony shaped the rise of the United States as an economic leader cannot be overestimated.

At the turn of the twentieth century, for example, there were more telephones in the hotels of New York City than there were in all of Spain. New York City played a central role in the configuration of the communications model, which was disseminated, first throughout the U.S., and then to other parts of the world. I suggested that the user navigate through the arguments first, which will provide context and take the user to the buildings, which are closely linked to the major historical events in this timeline. It is also possible to navigate through the events chronologically, following the history of the Bell System and of telephony.