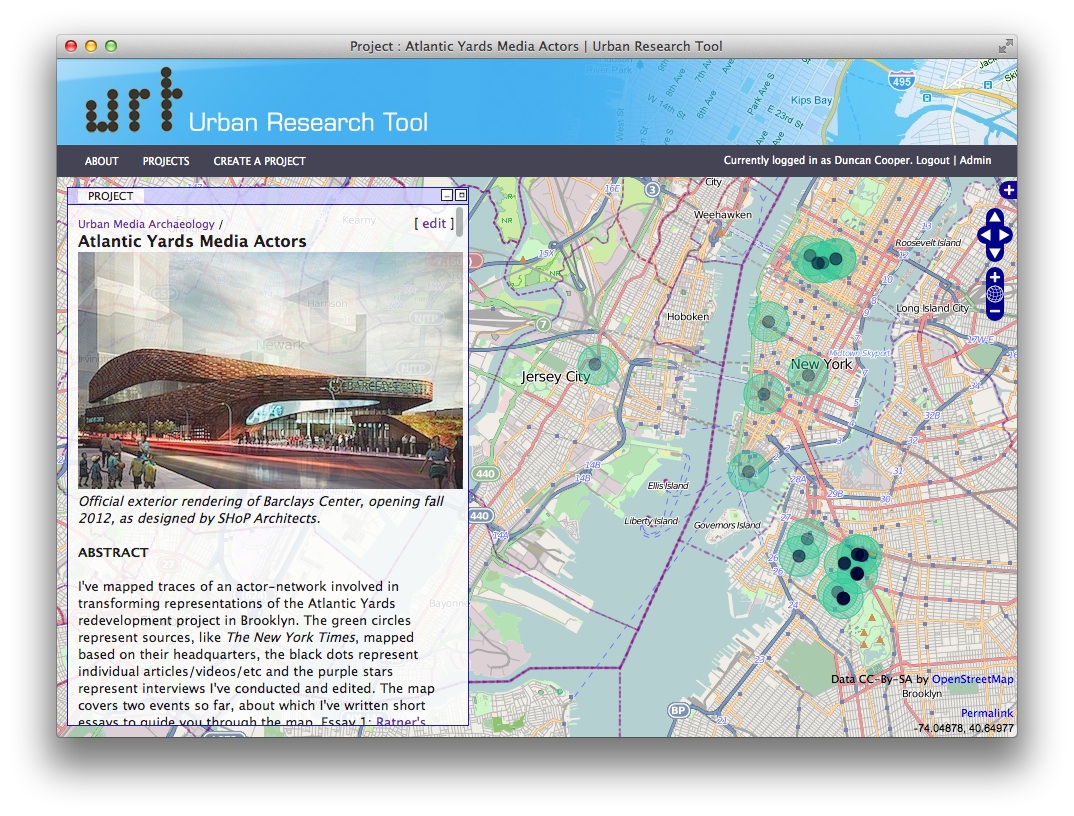 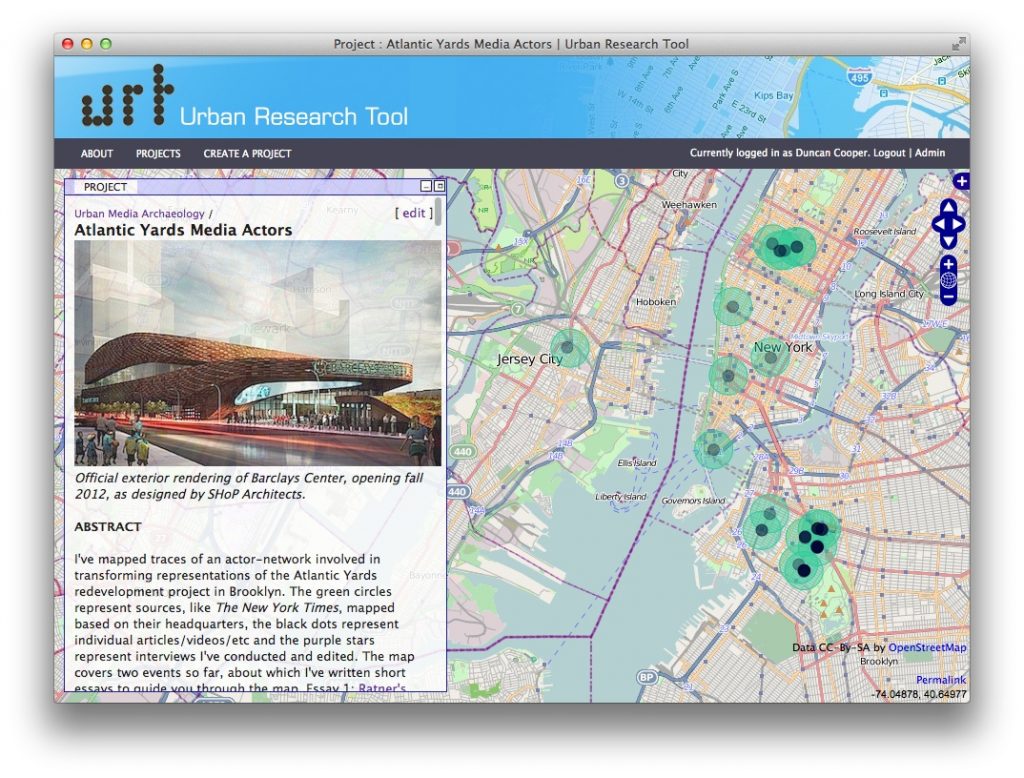 [In order for this to make sense, please first check out my final Atlantic Yards map, linked above and here]

My original project proposal says, “What this study ultimately proposes is an analysis of the connectedness of the forces behind Atlantic Yards’ media engagement, informed by the actors’ spatial material existence, in order to better understand how precisely the Atlantic Yards development unfolded the way it did.” I think I’ve done something useful here, but I’m not sure if that’s what it is. Certainly I didn’t analyze any connectedness. It exists, as I’ve demonstrated through “Referenced by” links in individual records, so users can click through to blogs that pick up certain material, but that’s really just a glorified linkback system. At least by presenting those links chronologically, the event essays foreground those connections—less “analyzing” and more “calling attention to.” [However, if some future iteration of URT incorporated something like little dotted lines between connected records when you click on one, as opposed to only allowing the creation of fixed paths, I think it could be even more useful.]

The “spatial material existence” thing is a little problematic with this project, because the relative pixel area of the map compared to my essays suggests, in the grand scheme of “Atlantic Yards Media Actors,” that location is more important than “Referenced by” digital linking/reblogging/etc. I think proximity is a point to be made, but not the whole point, and it might push users to get caught up in spatial observations, “Well, The New York Times is farther away than NY1, so I guess the farther you go, the less critical you become.” (If that’s the case, shouldn’t we also look in three-dimensions? The higher your elevator trip to the editorial department, the less you care about the little man?). In other words, with the events I’ve chosen, the intensity of opposition seems so obviously tied to proximity to Atlantic Yards that I can’t help but be a little suspicious of that conclusion. And anyway, it’s probably a very weak purview of “media” to focus so intently on semi-permanent online records.

And finally, my project nearly entirely sidesteps “how precisely the Atlantic Yards development unfolded the way it did.” It’s not really about that. Not that precision is unattainable, because I think repeating my method with even more careful descriptions of ‘important events’ another ten or so times could round out a clear(er) picture, just that it’s unattainable for now. This map hardly looks at Atlantic Yards at all; it looks around it. Before we worry about unfolding, lets make that surrounding space sufficiently thick first. And of course the project is not there. For example, I don’t feel my description of Ratner’s announcement was very precise. In my work there’s hardly the suggestion of negotiations between Forest City Ratner and New York politicians, or any careful description of the actual December 10th press conference. This isn’t an oversight, of course—I’ve long decided to start elsewhere, and I’ll get to it when the rest feels strong enough to warrant the shift.

And since I’m making this whole thing by looking back, it might be absurd to focus my account of accounts so specifically on transformations produced right at the time of the events. Take the documentary film Battle for Brooklyn, for example: I was so obsessed with what happened right when Freddy’s closed that my map overlooks the bar’s portrayal in the film. Or any academic accounts, people writing reflectively in journals. I need a better way to incorporate transformations produced after the fact. Or community meetings, which are unrepresented here in part because they don’t leave the same kind of records. Emails between actors are of course inaccessible. If I add up all the oversights, I start to wonder how well I’ve really described anything.

But still, I’m proud of my map. The more I understand actor-network theory, the more satisfied I can feel not making grand pronouncements implied by that first proposal. I think for the most part this map lets the actors’ work speak for itself, and I think my essay narrative is a step up from obsessive googling and browser tab juggling needed to traverse different accounts simultaneously. I’m not sure if I’ve given the human actors their fair due, which is where interviews will need to come in, moving forward. I like the clips I edited from talking with Tracy, but standing alone, without complementary and dissenting voices, they don’t feel complete. But as a whole, I like the way everything looks. The big green circles for sources point toward a future direction: better articulation of the transformations by different mediums (print or digital, video or text, etc.) and the baggages sources like The New York Times add on to the things they publish. The records represented by those circles are spare for now on purpose, but they could, with more research, tell much more. And I think my narrative strategy, where users are told from the third sentence on the first page to start by reading the essays, probably makes the whole project very legible. I don’t know how much you’d learn about Atlantic Yards by starting with a random post on Atlantic Yards Report, and I don’t think that’s the way to approach my project either. In the end I’ve still presented a certain point of view, but I think at least it makes sense.

At its most basic, my conceptual point about Atlantic Yards is to look at as much as you can. When you see my map from far enough away, it looks like all of Brooklyn is covered in green circles, but zoom in further and there are gaps begging to be filled in. And I think for now at least, that’s how it’s supposed to look.