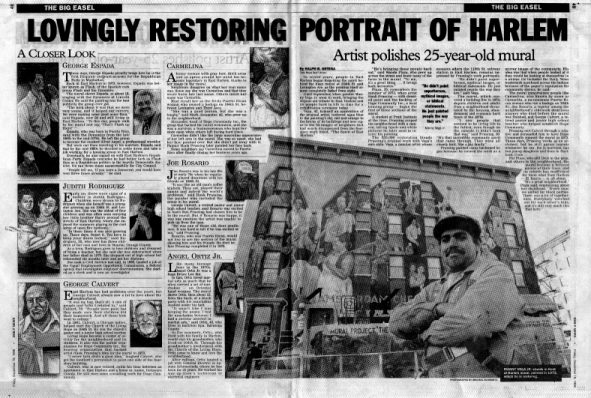 Since I began this project, the conceptual framework of the data itself seems to keep shifting, and one of my largest problems in addition to finding data, is how to frame and map the data I find.

I started with a fairly specific data type- “memorial graffiti” in latino communities. And while its is a widely known phenomena, finding specific artifacts has been much more difficult that I had expected. These murals, while commissioned, are still ephemeral in the sense that they are subject to many of the same regulations that most graffiti faces, and while they have the benefit of existing in communities where this type of public space intervention is accepted, they are still subject to removal if landlords don’t want them there.

My problem has been that there simply isn’t much documentation of memorial murals, because a lot of the time people who are interested in them are specific members of a community, that despite weeks of many futile trips to east harlem I haven’t been able to crack into.

My previous research experience has always taught me to start somewhere and it would lead somewhere else, but the assumption was that the information was always out there. I could always go to libraries to get an initial reading of where I had to go next. I guess that’s one of the great things about urban research- most of the time this information may not exist in the traditional sense and a lot of time it isn’t documented already. It’s really exciting, but I’ll admit this process has thrown me for a huge loop and forced me to re-evaluate many of my methods, because initially I expected to find more resources dedicated to memorial graffiti and historical documentation. I started with a book done in 1994 documenting memorial murals, but have found little data on murals since then, and since I want to attempt to map how people interact with these works in these neighborhoods, this data provides little more than embellishment or background to a tradition of mural as public as expression in a community (information I’m still debating on whether to include in my map).

How do you map something of which there is no documentation? While I may be looking for murals, they follow the tradition of graffiti in the sense that they occur in public space and they disappear, and if nobody has taken the time to archive them, they exist only in people’e memories- and in this case in a community that I am an outsider of.

After weeks of going up to east harlem with futile attempts to uncover current works, and unable to track many of the ephemeral works that have been washed over and are undocumented, I’ve decided the best thing to do is switch gears and focus on murals in general as public forms of communication in East Harlem (these will still include memorial murals, but extend to the idea of the mural as public space and the roles they play in this community).

This whole time I have been attempting to uncover works in the past and work to the current day, (a process that has been a bit frustrating) and what I think I need to do is work as much as I can to uncover information about works currently in East Harlem, and then decide if and how I can incorporate the historical presence of murals. There are people making murals in East Harlem today, and I think by opening my scope to murals in general I can find out more about who painted them, why, and hopefully be able to interview people in the area to see how they interact with these spaces.

Already opening up my search has helped my find sources that I was previously looking over. Focusing specifically of memorial murals excludes a lot of the community itself since these murals usually operate around smaller communities and networks. Opening up myself to community murals has led me to places like the East Harlem Preservation Society and opened up the idea of incorporating other third parties within the community that are actively working to preserve some works which is interesting since a lot of these works are still are still potentially illegal. It also opens up the perspective of how people determine what is part of what a community and what isn’t and what gets preserved and what doesn’t.

Attempting the mapping exercise yesterday, I was sort of caught off guard at how little I actually had to concretely map, despite many efforts to track data. I think opening up my scope a tiny bit while still focusing on East Harlem, will help me get the data I need to start looking at what I wanted to look at in the first place which is mural as communal commentary.

I’ve already found three murals, and only one of them was a traditional memorial. By opening myself to more data within the same parameters, that I had previously closed myself off to because it wasn’t specifically memorial, I’ll be able to see my map take shape a bit more, and ultimately have a more rewarding experience.