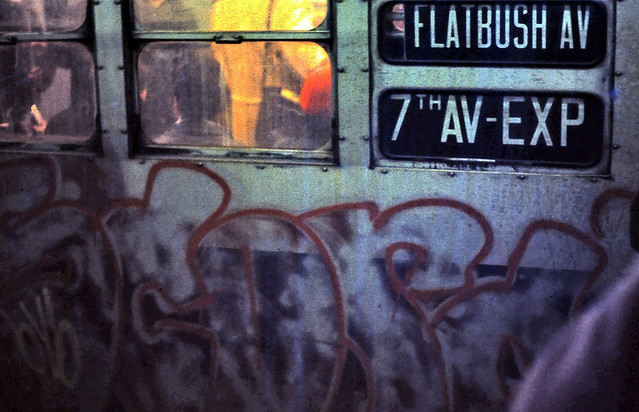 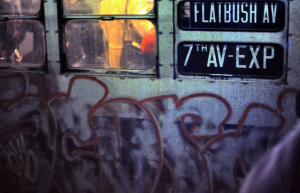 Starting in the late 1960‘s, through the 1990‘s, the “writing” of graffiti on subway cars in New York grew into a major movement among artists, activists, street gangs, and more.  The infrastructure of the New York City subway system provided graffiti artists with the means to communicate, largely covertly, between the various movements happening throughout the different boroughs.  The signatures of each artist competed for recognition and prominence.  Writers benches — which were benches located on subway platforms at key intersections of subway lines — became places for graffiti artists to collectively observe work on passing trains, critique, and collaborate on plans for future work.  The train yards where the Metropolitan Transportation Authority (MTA) kept out-of-service trains became the birthing-ground for the major works of legendary graffiti artists.

With this project, I am looking to explore the growth of subway bombing, or prominent works of graffiti, and how this artwork (a term that is subjective for some) used the subway lines to function, essentially, as underground forms of communication.  Which train lines were the most targeted and why?  How did the movement of graffiti art from train yards to the ends of subway lines contribute to the growth of other subway artists?  Ideally, this could also be connected to an examination of above-ground forms of art (not just graffiti art), protest and a broad genre of artistic or activist communication that blossomed, I suspect, in large part due to the infrastructure of the subway system.  The subway is central to the movement of people and communication in New York, and I think that the individual and collective expression found in subway car graffiti is an incredible movement to explore through a multimodal platform.

The MTA’s efforts to stop graffiti led to a sharp decline in subway graffiti in the 1990’s.  While sometimes romanticized in film, it seems that the original legacy of subway graffiti is fading.  In 2009, one of the most famous subway graffiti artists of the 70’s and 80’s, Iz the Wiz, passed away.  As the artists of the movement’s early years age, the availability of stories from primary sources is also disappearing.  I believe these artists’ stories deserve more documentation of their messages, their methods, their motivations, and their various direct recollections.  Currently, movies like Banksy’s Exit Through The Gift Shop may be shifting the public perception of graffiti.  It is more commonly looked upon as artwork, with major pieces being commissioned for buildings and famous graffiti artists like Banksy selling their work for thousands of dollars to collectors.  And yet at its core in New York works of graffiti were made by struggling artists, political movements, and marking of territories.

The question of why to map a project on graffiti is an important one.  With numerous books, photography exhibits, and videos already in existence, why do more?  I think that a multimodal space is necessary to unify the various elements that are accessible, and to examine the growth of graffiti over space and time.  Subway graffiti was often fleeting and short-lived work, and yet there is, thankfully, a good amount of documentation of works over the years.  Multiple interactive tools — photos, video, audio — can be directly linked to the space and time the works of graffiti existed in.  We can observe how the subway writings changed through space and time; for example, how did styles from one end of the A train’s subway line help to develop new styles or counter-reactions at the other end of the line?

I would expect to gather a fairly comprehensive set of photographs and video.  I would also like to include my own independent video work within this project, depending on the amount of access to older artists I can gain, or found footage that I can compile.  This could take the form of short videos or audio documentation, which could be placed on the URT map according to location, as well as time period.