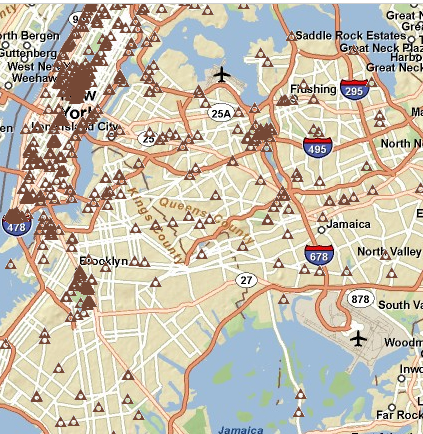 There are way too many monuments in NYC. Perhaps too many is the wrong way to put it. There is an overwhelmingly large amount of monuments in NYC. I knew this prior to starting this project, but really had no idea how many I was going to have to sort through before narrowing my research down to a select few. Sorting through list upon list of recorded public monuments solidifies my need to make this project different then what is already out there. My hope is to create a map that exposes a narrative that has not been documented.   I am trying to get a sampling of various locations and time periods in the hopes that my base map will open the door to any patterns or trends that have yet to be documented. More than anything the idea of having a map that has some sense of balance and structure while still allowing the historical context to shift seems really important. 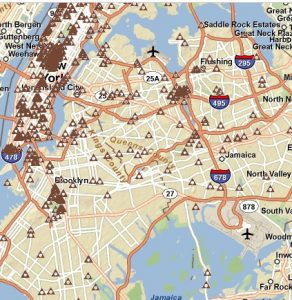 Getting a list of monuments, their date of construction and  locations was a bit more tricky than originally expected. The maps accessed on NYC Data do not allow you access the name of each plot without uploading it. After uploading you are left with a list of names and their geospatial coordinates .  My solution was to cross reference the name of the project with the NYC Park and Recreation site.  In most cases I was able to find the date of construction as well as a general location.  In some rare cases the Parks  site provided an inscription or some historical context within which the monument has been commissioned.   The process almost became like a scavenger hunt as no singular site had all of the information needed.
In addition to allowing me to narrow down my list, NYC Open Data, allowed me to conceptualize what James Corner meant when he referred to some maps as  a “tracing” (Corner, 231). I initially thought of the NYC Open Data Map as a tracing.   The map has nothing that makes it particularly interesting or different  – what we get is purely data.  However, rather than simply being a regurgitated version of what has already been put out into the world, NYC Open Data functions almost as the skeleton for future maps.  We see information plotted in a bare bones format, but what we choose to do with the information varies. In providing me with the information to begin my monument hunt, the map  allows others to create something that hopefully results in a map that is successful in  “uncovering realities previously unseen…”(Corner, 231).