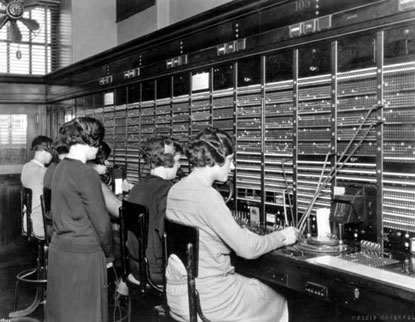 This has been a very challenging experience. This was the first time that I ever thought about mapping arguments. Previously, I had a rather narrowed idea of what a map was and its possibilities. To me, a map was a physical representation, a guide to location, or perhaps an organizational tool for writing.

However, after taking the course and becoming aware of so many different kinds of maps, and the theoretical approaches to mapping scholarly projects, I find myself excited and engaged by a new way of thinking about ideas and arguments which is multilayered and open-ended.

In implementing my map for the Bell System and the history of telephony, I went through a number of stages. My initial idea was to map the relationship of communications switching stations in NYC with population density or sprawl. I was interested in the contention that communications infrastructure has shaped the American city. Unfortunately, I was unable to come up with the kind of data I would have needed to create such a map. I had been looking at the New York City telephone switching stations and my project’s focus began to move to the development of telephony in the U.S.

The history of the Bell System has been widely described although not all information pertaining to it is freely available (my request to access AT&T archives did not receive an answer). My contribution is, I feel, to present the company’s history in terms of a graphical analysis, allowing users to make their own path through the information. As for the buildings themselves, I attempted to give them agency to embody the history of communications. One of my formal constraints I found limited the content of the map is that there was too much information that I could not include in the space of the map. This let me to edit in a way which left the map a little bit behind the written arguments.

Looking back at my own progress through this process, and listening to my classmates and reading their process blogs, I am left with some understanding of how humble one feels when facing the enormous amount of data generated by one’s first grand idea. I also know now that in dealing with masses of data, you realize you have to narrow down your concept in order to make the project manageable. Finally, I must say that although in general the URT was easy to manipulate, I had to ask for help on some of its functions.