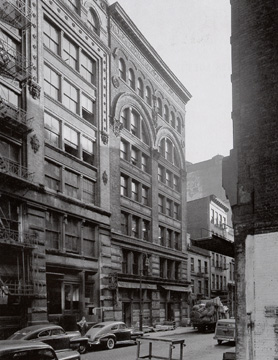 In 1966, Fluxus founder and counter cultural activist George Maciunas became captivated with the idea of artist cooperatives as a vehicle for the liberation of artists. Beyond providing artists with a place to live and work, he wanted to establish collective workshops, food-buying cooperatives and theaters to “link the strengths of various media together and bridge the gap between the artist community and the surrounding society” (Simpson). Inspiration for Maciunas can be traced back to 1960, when he attended composition classes taught by the electronic music composer Richard Maxfield, a former student of John Cage at the New School for Social Research. The class was a refuge for artists who sought to break out of traditional molds – its environment was exhilarating for Maciunas.

In 1961, Maciunas coined the term Fluxus, which was meant to draw attention to the essentially fluid and open ended nature of art (Schmidt-Burkhardt 9).

“Fluxus had less to do with art theory than with a specific practice aimed at the trivialization of the aesthetic, and the infiltration of art by the everyday . . . It can be defined by an intersection between art and life. It has been described as a mindset. It is something you do, it is something you are (Schmidt-Burkhardt 9)”.

In August of 1966, Maciunas’ dream of establishing an artist cooperative seemed possible when he learned that an “Experimental Housing Bill” had been drafted by the United States Government that would allow artists to purchase their studios and workshops in New York City, soon to be Soho (Kellein 131). Interested buyers were able to borrow federal fundings in order to turn their work space into homes. In short, Soho became the ideal place for Fluxus.

Luckily, industrial loft buildings in Hell’s Hundred Acres area of Manhattan had a high vacancy rate due to the proposed eighteen-lane expressway along Broome Street, from the East River to the Hudson River. Landlords and tenants were reluctant  to enter into new leases. Owners were happy to sell their buildings for less than $3 or $4 a square foot (Bernstein & Shapiro 48). By 1967, Maciunas found 10 buildings in the area bounded by West Broadway, Mercer Street, Houston Street and Canal Street. 80 Wooster became the first building Maciunas renovated for occupation by artists. It became the base of the operations for the entire Flux-house project – the center of the worldwide Fluxus art movement.

In 1968, the Flux-house phase in Soho came to an end. Despite the failure of Flux-house in 1968, it can be agreed that Fluxus was important. It helped hundreds of artists establish themselves. Fluxus provided artists an urban oasis, where they could work and live in a community where they could thrive as artists.

The art produced by Fluxus artists was a hybrid form of intermedia. Distinction between art forms naturally began to break down, and a new type of art was born. In my project I would ultimately like to explore the presence of Fluxus artists in Soho. Throughout the 20th century Soho has been a diverse commercial and residential district as well as home to the Fluxus art movement. Originally inspired by the New Museum’s Bowery Artist Tribute Mapping Project, which focuses on researching the history of artists and art production on the Bowery, I would like to focus my project on researching the history of artists and art production in Soho. I would also like to explore how Soho was established as an artists community. What effect did Fluxus have on Soho? What effect did Fluxus and artists living in Soho have on the gentrification of Soho? The artists who entered Soho in the mid-1960s established a cultural hothouse. Soho became an educational arena where people would learn and inadvertently teach one another all the time (Kosetelanetz 39).  Unlike most communities Soho operated in a de facto anarchist community (Kosetelanetz 40). There was no hierarchy, no tests, and no degrees, but there was the unity found in universities. No one ever planned on it becoming an artist enclave. “Although the creation of a single work of art maybe an individual effort, artists have often clustered together to share ideas, offer mutual support and provide a sympathetic audience (James R. Hudson, The Anticipated City, 1987)”, perhaps no where is this (collaboration) more evident then in Soho (Kosetelanetz 39). What effect did Fluxus artists and artists living and producing work in Soho have on Soho itself? Through mapping, I would like to map the artists who have lived and worked in Soho. Pictures, documents, audio-visual clips and slides of their work will be included on my map. I will include Fluxus artists and artists linked to Soho during the Fluxus phase.

Cohen-Solal, Annie. Leo and His Circle: The Life of Leo Castelli. Knopf, 2010. Print.

Simpson, Charles, “The Achievement of Territorial Community” in SoHo: The Artist in the City. Chicago: The University of Chicago Press, 1981. Print. pp. 153-188